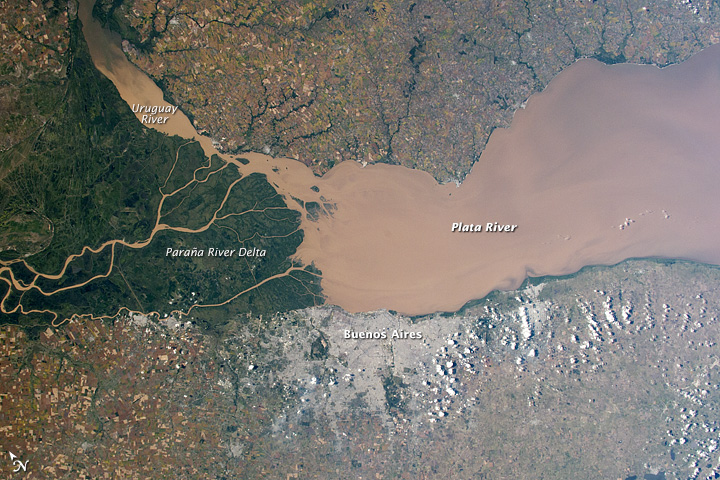 This photograph was taken as astronauts on the International Space Station flew over the delta and green swamps of the Paraná River on the Atlantic coast of Argentina. The Paraná, South America’s second largest river after the Amazon, pours muddy water into a wide estuary known as the Plata River.

The gray mass of Argentina’s capital city, Buenos Aires (metro population of 12.7 million in 2010), is less prominent when viewed from space, although astronauts quickly attune their eyes to the subtle signature of cityscapes. Numerous small farm plots on red soils surround the delta and city.

The muddy, brown Paraná mirrors the Amazon, which is also turbid. In this image, tidal backwash transports muddy water a short distance upstream into the smaller Uruguay River.

Click here for more detailed images of the city, including a night view.

Astronaut photograph ISS043-E-91884 was acquired on April 6, 2015, with a Nikon D4 digital camera using a 50 millimeter lens, and is provided by the ISS Crew Earth Observations Facility and the Earth Science and Remote Sensing Unit, Johnson Space Center. The image was taken by a member of the Expedition 43 crew. The image has been cropped and enhanced to improve contrast, and lens artifacts have been removed. The International Space Station Program supports the laboratory as part of the ISS National Lab to help astronauts take pictures of Earth that will be of the greatest value to scientists and the public, and to make those images freely available on the Internet. Additional images taken by astronauts and cosmonauts can be viewed at the NASA/JSC Gateway to Astronaut Photography of Earth. Caption by M. Justin Wilkinson, Texas State University, Jacobs Contract at NASA-JSC.

Buenos Aires, the largest city in Argentina, sits near the outflow of the second largest river in South America.