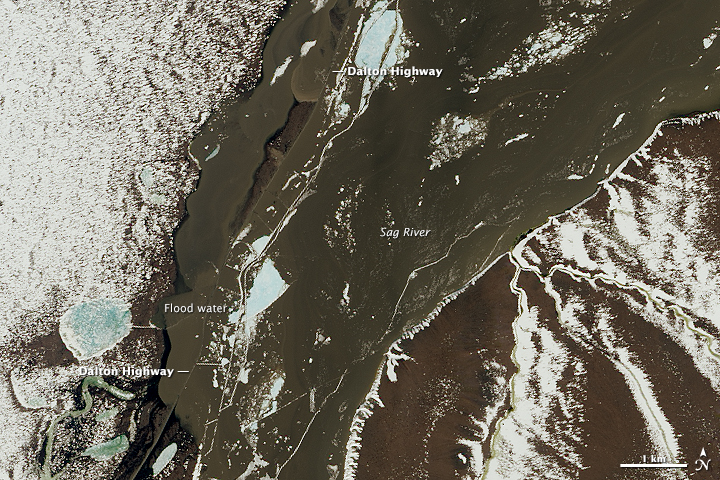 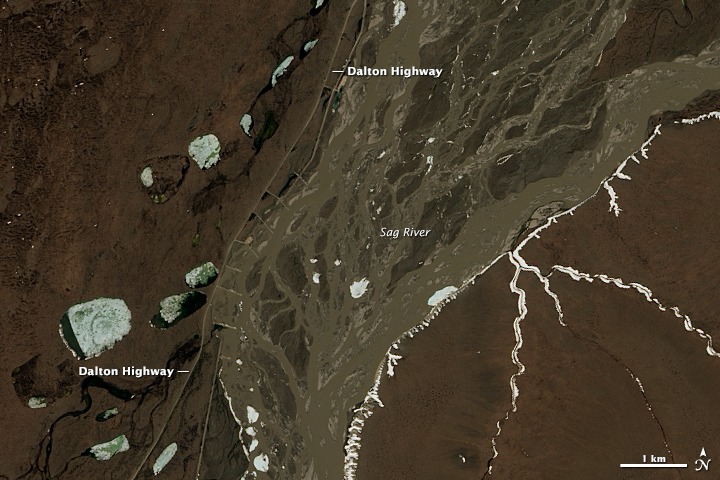 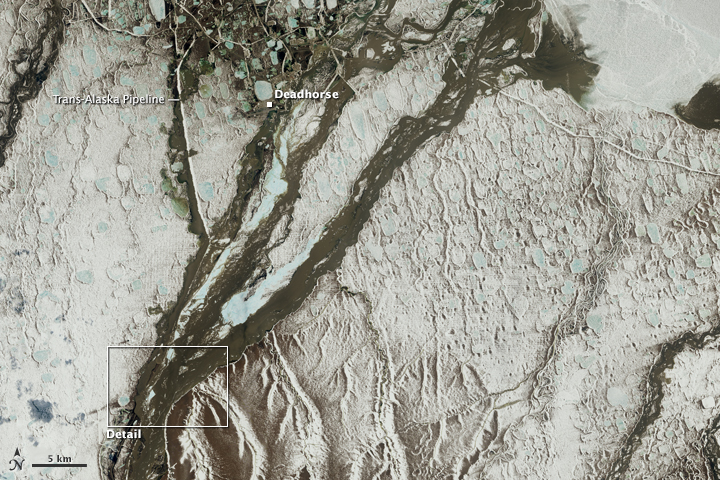 Earlier this spring, it was runaway ice that gummed up the Dalton Highway in far northern Alaska. Now, after an unseasonably warm spring, floodwater has closed the only access road to Prudhoe Bay, a major U.S. oil field along the Arctic Ocean. On an average day, more than 100 trucks make the sixteen hour trip from Fairbanks to Deadhorse, a small town at the end of the Dalton Highway populated by seasonal oil workers. Authorities expect the highway to remain closed until after the river crests later this week or next.

The Operational Land Imager (OLI) on Landsat 8 captured a view of the flooding on May 19, 2015. For comparison, the middle image shows the same area on June 14, 2013. The lowest image shows a broader view of the flooded area. The normally braided channel of the Sag River has swollen into one large stream, and muddy floodwater is visible washing over long stretches of the highway. A maintenance road, which marks a buried section of the Trans-Alaska Pipeline, also appears to be flooded. A few large pieces of ice are visible floating in the river. Note there is significantly less snow cover in the 2013 image because it was acquired later in the year. Turn on the comparison tool to slide between the two images.

In recent years, Prudhoe Bay has often been listed as the most productive oil field in the United States, but in 2015 it lost the top spot to the Eagle Ford and Sprawberry fields in Texas due to the proliferation of horizontal drilling and hydraulic fracturing in shale layers in the Texas fields.

The swollen Sag River has closed a trucking highway that connects Fairbanks to the Prudhoe Bay oil fields in far northern Alaska. 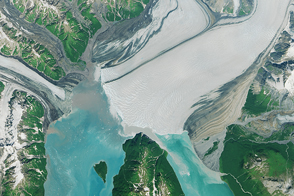 Lahars from Alaska’s Mt. Redoubt Volcano pass close to the Drift River Oil Terminal in an image acquired on April 4, 2009.

Image of the Day Land Water Volcanoes Snow and Ice