Rivers and Snow in the Himalayas 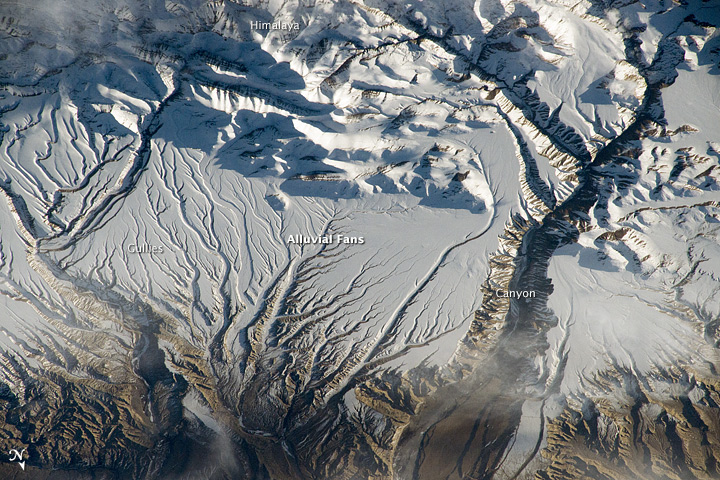 This photograph was taken from the International Space Station as astronauts flew over the Himalaya range, near the China–India border. It shows one of the main ranges of the Himalayas, where peaks cast strong evening shadows on the snow. The mountains in this image reach great altitudes (5,200 meters or 17,000 feet); the peaks just beyond the upper edge of the image reach high enough (6,500 meters or 21,325 feet) to host glaciers.

For millions of years, water has eroded rock from these high mountains and deposited the sediment in ancient, broad alluvial fans. Snow cover highlights these strikingly smooth surfaces, while a trellis-like network of gullies cuts through and casts sinuous shadows. The largest river in the scene has cut a 500-meter-deep (1,650 foot) canyon (right).

Although the rivers in this photo drain northward from the Himalayas, they ultimately flow back to the south. The streams accumulate in the Sutlej River (not in this photo) and pass through the mountains toward the lowlands of Pakistan and, finally, the Arabian Sea.

Astronaut photograph ISS043-E-93251 was acquired on April 8, 2015, with a Nikon D4 digital camera using a 500 millimeter lens, and is provided by the ISS Crew Earth Observations Facility and the Earth Science and Remote Sensing Unit, Johnson Space Center. The image was taken by a member of the Expedition 43 crew. The image has been cropped and enhanced to improve contrast, and lens artifacts have been removed. The International Space Station Program supports the laboratory as part of the ISS National Lab to help astronauts take pictures of Earth that will be of the greatest value to scientists and the public, and to make those images freely available on the Internet. Additional images taken by astronauts and cosmonauts can be viewed at the NASA/JSC Gateway to Astronaut Photography of Earth. Caption by M. Justin Wilkinson, Texas State University, Jacobs Contract at NASA-JSC.

Long shadows and deep gullies make for a majestic landscape.