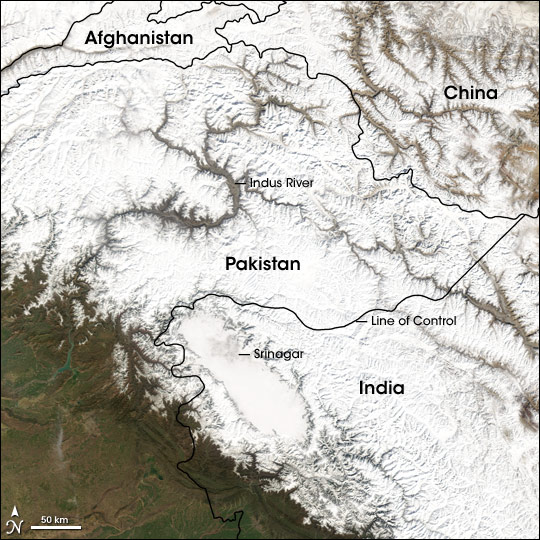 The most severe winter to hit southwest Asia in decades has cost hundreds of lives in Pakistan, India, and Afghanistan. Heavy snow continues to fall over the Himalaya Mountains in both Indian-administered and Pakistan-administered Kashmir and in the Hindu Kush of Afghanistan. As the above image shows, both mountains and valleys are buried in snow across the region, with the exception of the Indus River valley in Pakistan. The snow has isolated many communities, stranding them without access to food supplies. Most of the deaths, however, have occurred as people have been trapped under avalanches in the steep mountains. At least 230 people died in Indian-administered Kashmir, many of them in a series of avalanches near the capital, Srinagar, where 4.5 meters (15 feet) of snow has fallen.

When the Moderate Resolution Imaging Spectroradiometer (MODIS) on NASAï¿½s Terra satellite acquired this image on February 22, 2005, the clouds had cleared and the sun shone over Kashmir. Low cloud, slightly smoother and duller white than snow, fills the valley around Srinagar. In the high mountains exposed to the sun, the avalanche hazard could increase as melting snow becomes unstable.

Harsh winter conditions continue to take a toll on Pakistan, India, Afghanistan, and Tajikistan as heavy snow and avalanches bury or isolate communities. These MODIS images show the extent of the snow cover in February 2005.