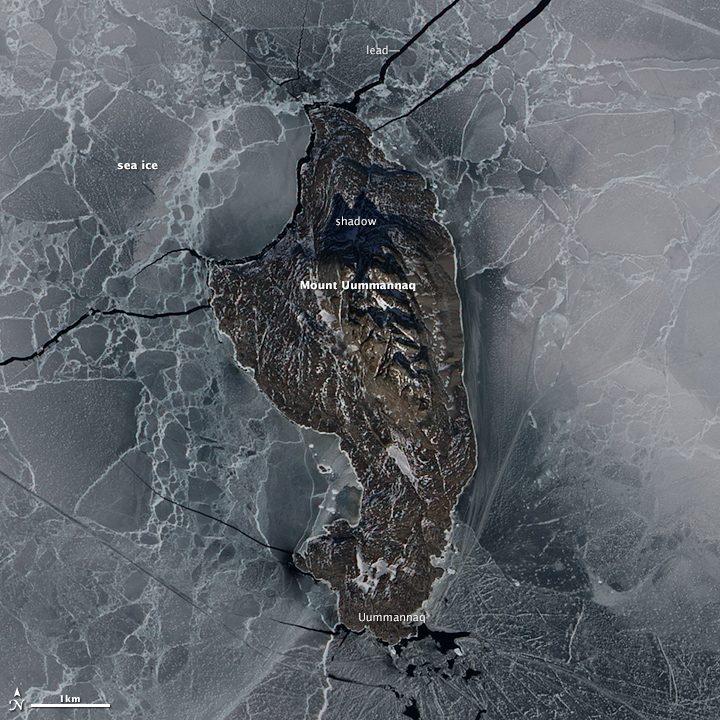 It is no mystery how Uummannaq Island got its name. In Greenlandic, the word means “heart-shaped,” an apt description for the multi-peaked mountain that towers over the 12 square kilometer (5 square mile) island.

Located off the coast of northwestern Greenland in Uummannaq Fjord, the mountain’s granite and gneiss peak rises sharply from sea level to about 1,170 meters (3,840 feet), giving Uummannaq three times the height of One World Trade Center (the tallest skyscraper in the Western Hemisphere). The rock that makes up Uummannaq is ancient, likely forming 3.0 to 2.8 billion years ago during the Archean Eon.

Located well north of the Arctic Circle, Uummannaq Island is home to one of the most northerly towns in Greenland. The sun never drops below the horizon for nearly three months in summer, and winter brings months of darkness. The Advanced Land Imager (ALI) on the EO-1 satellite captured this image of the island on May 16, 2012.

Looking down from above, it can be difficult to locate the summit. But the two-pronged shadow falling to the north offers a sense of the mountain’s sharp relief. Sea ice still surrounded the island, but breaks in the ice—called leads—expose seawater beneath it. Usually, sea ice around Uummannaq breaks up and drifts away by the end of May.

Home to about 1,200 people, the town of Uummannaq lies on the southern tip of the island. Some scientists use Uummannaq as a base to conduct field research on nearby outlet glaciers that drain the Greenland Ice Sheet. For instance, Aberystwyth University glaciologist Alun Hubbard recently used side-scanning sonar on the Uummannaq-based research vessel SV Gambo to map changes in the ice front of nearby Store Glacier.

Samuel Doyle, a member of Hubbard’s research team, was so impressed by the region’s rock climbing possibilities that he organized a climbing expedition in 2010. Scientists from the University of Aberystwyth scientists and crew from SV Gambo snapped hundreds of photographs and posted their climbing report online. The photograph of Uummannaq Island (below) was shot from nearby Storoen Island. 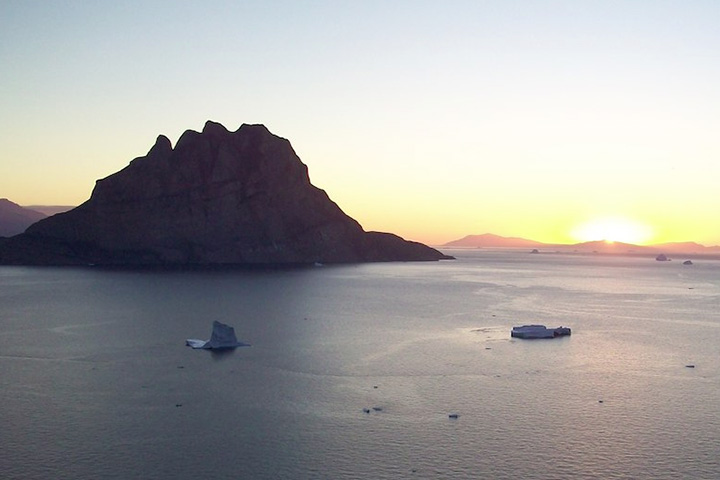