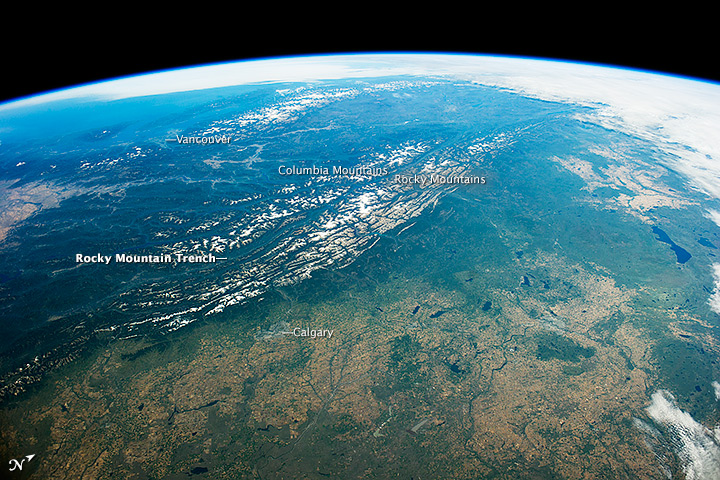 In western Canada, rumor has it that the Rocky Mountain Trench is so large that it is visible from the Moon. The story goes that one of the Apollo astronauts in lunar orbit radioed back to Mission Control to ask about the straight line he saw cutting across northwestern North America.

“It turns out that is not even remotely true,” said Ben Gadd, a naturalist and author of the Handbook of the Canadian Rockies. When NASA historians checked all of the Apollo transcripts for references to a feature like the Rocky Mountain Trench, they found nothing. The Moon is so far from Earth (363,000 kilometers or 226,000 miles) that it is not possible to distinguish such a feature with the naked eye.

Astronauts can, however, see the Rocky Mountain Trench quite clearly from the International Space Station (ISS), which maintains an orbit about 400 kilometers (250 miles) above the surface of Earth. This photograph was taken by an astronaut on September 6, 2014. The trench, with a width that ranges from about 3 to 16 kilometers (2 to 10 miles), separates the Columbia Mountains on the west and the Canadian Rockies on the east. (Note that the image has been rotated so that north is to the right.) Exposed rock appears gray; forests are green; grain fields are yellow; snow-capped mountains are white.

While geologists still debate the circumstances that created the trench, the section seen here likely formed due to underlying normal faults that emerged in the aftermath of tectonic collisions that pushed up the mountains. Normal faults are ruptures in the rocky outer part of Earth—the lithosphere—that generally emerge when land surfaces get stretched out. In a normal fault, one piece of lithosphere drops down relative to another.

In this case, the normal faults that underlie the southern half of the Rocky Mountain Trench likely formed as the lithosphere stretched after a period of mountain building that occurred between 185 million and 55 million years ago. At least three chains of islands plowed into the western coast of North America, forming mountains by bulldozing rock layers onto North America. In this part of western Canada, mountain building progressed from southwest to northeast, so the Columbia Mountains are older than the Canadian Rockies. With the normal faults in place, rivers and glaciers have since worked to widen and deepen the trench through erosion.

“Along the section of the trench seen in the photo, there has been little or no San-Andreas-style horizontal slippage. The rock on either side has moved mainly up on the northeast side and down on the southwest side,” explained Gadd. “But in the northern part of the trench (not visible) there is a magnificent transcurrent fault, in which the land on the southwest side has moved at least 400 kilometers toward the northwest, and perhaps as much as 900 kilometers.”

Astronaut photograph ISS040-E-129996 was acquired on September 6, 2014, with a Nikon D3S digital camera with an 31 mm lens, and is provided by the ISS Crew Earth Observations experiment and the Image Science & Analysis Group, Johnson Space Center. The International Space Station Program supports the laboratory to help astronauts take pictures of Earth that will be of the greatest value to scientists and the public, and to make those images freely available on the Internet. Additional images taken by astronauts and cosmonauts can be viewed at the NASA/JSC Gateway to Astronaut Photography of Earth. Caption by Adam Voiland, with information from Ben Gadd.

As seen from the International Space Station, a long trench divides the Columbia Mountains and the Canadian Rockies. 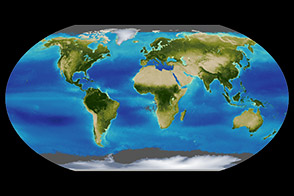 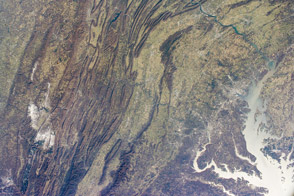