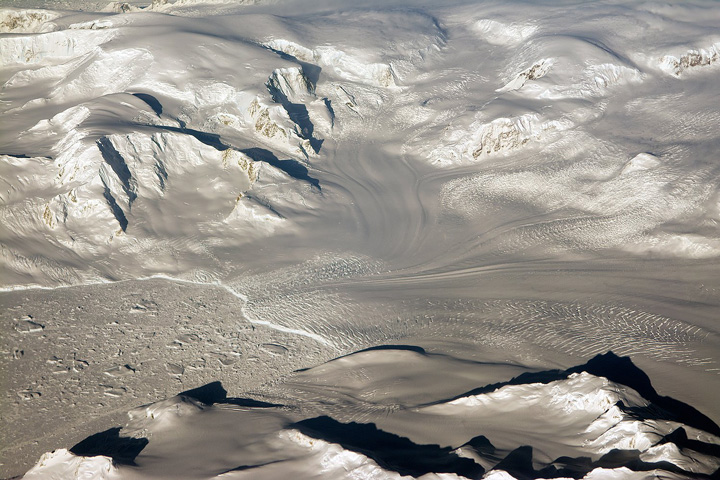 A break in the clouds on October 29, 2014, allowed scientists the opportunity to fly over Pine Island Glacier—one of Antarctica’s most rapidly changing areas. The flight was part of NASA’s Operation IceBridge, a mission that makes annual surveys of Greenland and Antarctica with instrumented research aircraft.

After months of darkness in Antarctica, the Sun continues to rise a little higher each day. IceBridge project scientist Michael Studinger captured this photograph of late day sunlight striking glaciers and mountains in coastal West Antarctica at the end of the October 29 survey of Pine Island Glacier.

The recent, rapid changes at Pine Island have made it a high priority target for IceBridge. The weather, however, is not always agreeable. Paths flown in 2014 were last surveyed by IceBridge in 2012, and prior to that from 2002 to 2009. In 2013, satellite imagery found that a large iceberg had separated from the glacier's calving front. During the first 2014 flight, instruments found a new crack—a relatively common feature, according to scientists.

Repeat measurements of land and sea ice from aircraft extend the record of observations once made by NASA's Ice, Cloud, and Land Elevation Satellite, or ICESat, which stopped functioning in 2009. In addition to extending the ICESat record, IceBridge also sets the stage for ICESat-2, which is scheduled for launch in 2017.

Glaciers and mountains in West Antarctica glow in the evening sunlight.