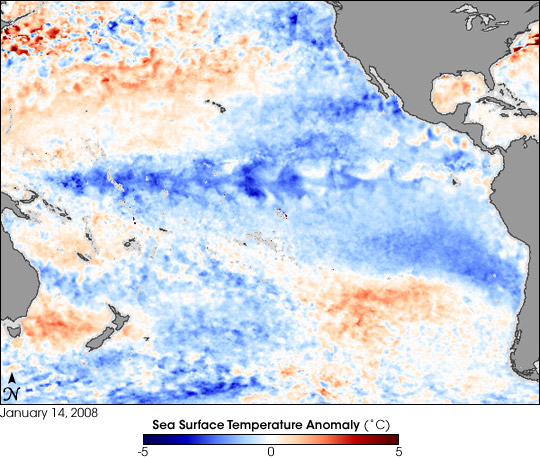 This image shows the temperature anomaly for the top millimeter of the Pacific Ocean’s surface—the skin temperature—on January 14, 2008, based on data from the Advanced Microwave Scanning Radiometer (AMSR-E) flying on NASA’s Aqua satellite. In this image, January 14, 2008, temperatures are compared to the long-term average measured by a series of sensors that flew on NOAA Pathfinder satellites from 1985 to 1997. A strong band of blue (cool) water appears along the Equator, fanning out near North and South America. Patches of orange to red (warm) conditions appear north and south of this strong blue band. As of January 2008, the U.S. National Oceanic and Atmospheric Administration (NOAA) predicted that La Niña conditions would continue until spring, with a possible weakening in February 2008.

Cool ocean temperatures can impede cloud growth, leading to reduced rainfall from South America to Indonesia. In the continental United States, La Niña affects the jet stream, which in turn affects weather. Typical La Niña winter weather patterns include very cool, wet conditions in the Pacific Northwest, especially cold winter conditions on the Great Plains, and unusually dry conditions in the Southwest and Southeast. Because La Niña conditions can persist for years, such adverse weather conditions can continue. In short, continued La Niña conditions were expected to prolong the droughts in the American Southeast and Southwest.

You can download a 0.25-degree-resolution KMZ file of global sea surface temperature anomaly suitable for use with Google Earth.