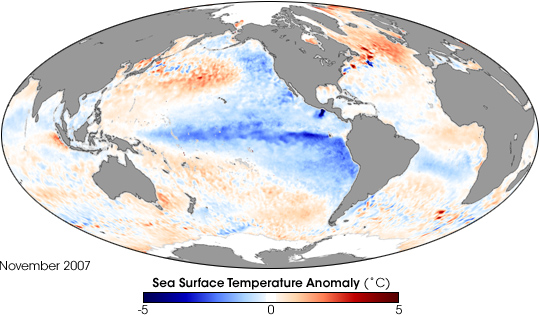 On December 20, 2007, the U.S. National Oceanic and Atmospheric Administration (NOAA) issued its weather prediction for the winter of 2007-2008. In forecasting weather for the continental United States, NOAA examines several factors, but first among them is the state of the El Niño/Southern Oscillation (ENSO), which leads to El Niño and La Niña. For the coming winter, NOAA predicted a moderately strong La Niña.

During La Niña, sea surface temperatures in the eastern tropical Pacific are below average, and temperatures in the western tropical Pacific are above average. This pattern is evident in this temperature anomaly image for November 2007. This image shows the temperature for the top millimeter of the ocean’s surface—the skin temperature—for November 2007 compared to the long-term average. A strong band of blue (cool) water appears along the Equator, particularly strong near South America. Orange to red (warm) conditions appear north and south of this strong blue band. The 2007 data were collected by the Advanced Microwave Scanning Radiometer (AMSR-E) flying on NASA’s Aqua satellite. The long-term average is based on data from a series of sensors that flew on NOAA Pathfinder satellites from 1985 to 1997.

La Niña conditions had been building throughout the year, and they contributed to a severe drought in the American Southwest.