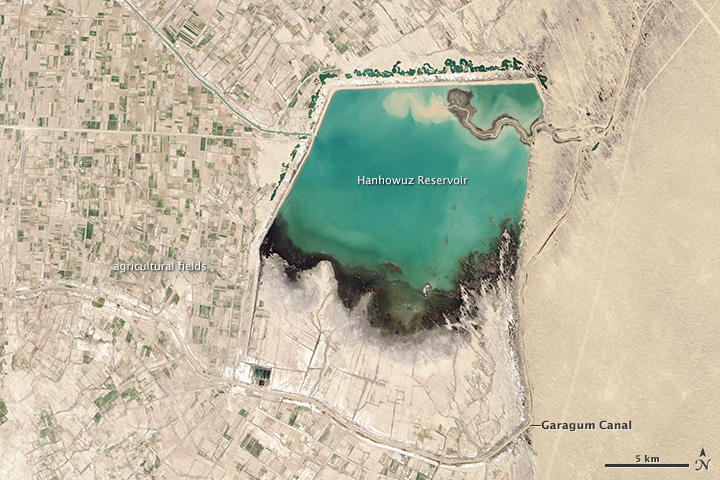 Turkmenistan is a desert country that lies east of the Caspian Sea and borders Iran, Afghanistan, Uzbekistan, and Kazakhstan. Annual precipitation across the country ranges from 300 millimeters (12 inches) in the mountains to 80 millimeters (3 inches) in the desert northwest. In a country just larger than California, nearly 80 percent of the land is defined as desert.

Despite the harsh, dry environment, these desert expanses were once part of the ancient east-west trade route between the Roman Republic and Han Dynasty. As part of the Silk Road from Europe to China, Turkmenistan was coveted by the Mongols, Turks, and Russians. Each have taken turns ruling the region over the past two millennia.

In the 18th century, people in the region started to think about taming the great Garagum Desert (also known as the Kara Kum or Karakumsky). The idea was to bring water southward from the Amu-Darya River, which runs through the northern desert. Under Soviet rule in the 1950s, the idea was realized.

In a feat of engineering, water from the Amu-Darya was channeled more than 1,300 kilometers (800 miles) to irrigate southern lands. Under construction from 1954 to 1988, the Garagum Canal project opened a million hectares of land to farming of cotton, wheat, melons, and animal fodder. Today, agriculture accounts for 7 percent of Turkmenistan’s gross domestic product and employs nearly half of the country’s workforce.

In this natural-color Landsat 8 image acquired on April 18, 2014, the Hanhowuz (Khauzkhan) Reservoir jumps out as a splash of turquoise amidst desert browns. The reservoir was constructed in a natural depression to capture winter runoff and overflow from the canal for use later during the driest periods of summer. Phytoplankton thrive in the warm waters, as do many commercial fish—including Aral barbel, asp, and catfish.

In the image, Garagum Canal is the brown ribbon dropping down from the upper right corner and heading south and east from the reservoir. A portion of the canal is diverted, and you can see the brown sediment-laden water entering the reservoir from the east and dropping its load of suspended sediments. The water that leaves is turquoise and travels west to irrigate the Tedjen Oasis. Roughly rectilinear farmlands appear on either side of that section of the canal.

Water is vital to the existence of Turkmenistan, but the canal that started as an engineering wonder for arid lands has also turned out to be an environmental tragedy. The canal has starved the Aral Sea, which has lost about 90 percent of its water since the canal’s creation. Making matters worse, inefficient earthen canals lose nearly half of the canal water between the Aral Sea and Turkmenistan’s farms. Smudges of green-grey along their sides of the canal (north of the reservoir) show where water has seeped out.

An engineering wonder and boon for citizens in Turkmenistan is also an environmental problem.