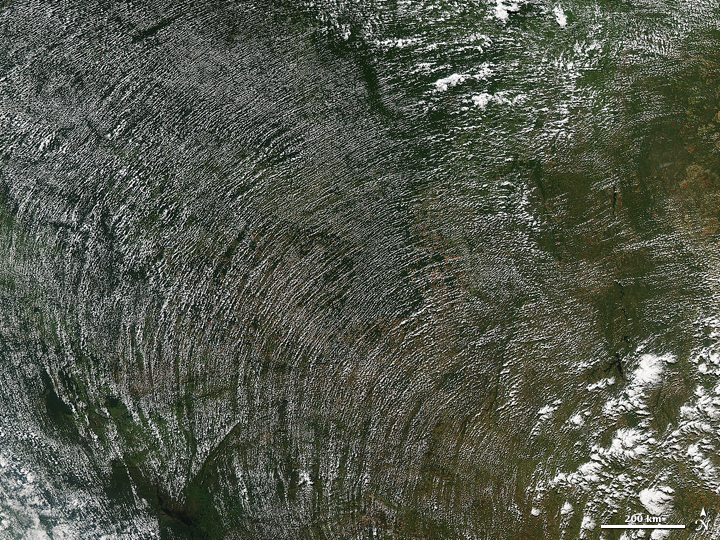 To the human eye, the wind is invisible. It can only be visualized by proxy, by its expressions in other natural phenomena like blowing leaves, airborne dust, white-capped waters—or the patterns of clouds.

Cumulus cloud streets trace the direction, and sometimes the intensity, of winds. As puffy cumulus clouds form in the warmth of morning sunlight, they line up parallel to the direction of the wind. Often this means a straight line, as seen in the winter when cold winds blow over warmer waters. But clouds can also line up along the concentric, curved lines of high-pressure weather systems.

The image above was acquired by the Moderate Resolution Imaging Spectroradiometer (MODIS) on NASA’s Aqua satellite on June 5, 2014. It shows a broad swath of the Amazon rainforest in Brazil and Bolivia as it appeared in the early afternoon (1:20 p.m. local time or 1720 Universal Time).

“Convective cloud streets form during the day due to heating of the land, often over fairly flat surfaces,“ wrote Patrick Minnis, a cloud researcher at NASA’s Langley Research Center. As sunlight warms the Amazon rainforest in the morning, water vapor rises on columns of heated air (thermals). When that humid air runs into a cooler, more stable air mass above, it condenses into fluffy cumulus clouds that can line up with the prevailing winds. “The clouds form in the morning and die out in the afternoon as the surface heating diminishes. They are very common over the United States during summer.

Kristopher Bedka, another Langley cloud researcher, examined a numerical weather prediction model to find the wind direction near the top of the boundary layer on June 5. “There appeared to be a high-pressure center in southeast Brazil causing the air flow to move counterclockwise around the center,” he noted. “The cloud streets aligned almost perfectly with the wind flow.”

Puffy cumulus clouds spin around a high-pressure system in the Amazon rainforest. 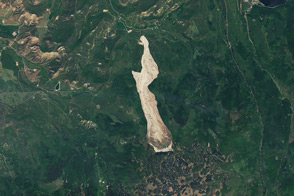