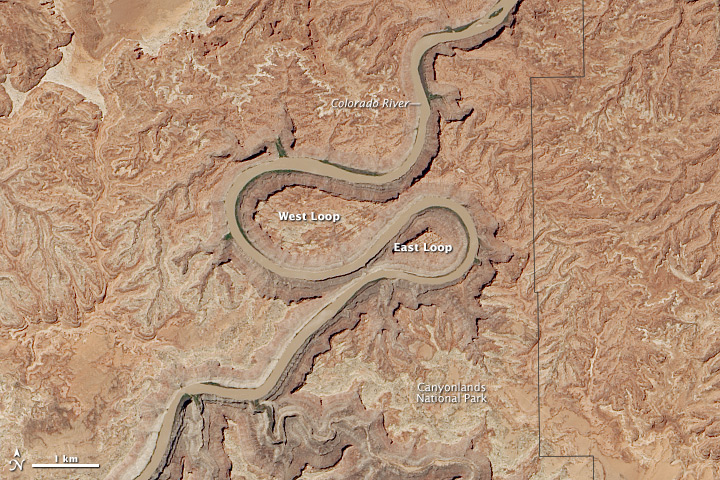 Meanders and oxbows are usually associated with gently flowing rivers passing over soft soil on broad floodplains, much like today’s Lower Mississippi River. But as this image, which was captured by the Operational Land Imager (OLI) on Landsat 8 shows, the Colorado River—better known for sheer canyons—boasts some dramatic, serpentine meanders as well.

This double oxbow—called the Loop—is located in Canyonlands National Park about 8 kilometers (5 miles) upstream from the confluence of the Green and Colorado Rivers. Known as an “entrenched meander” by geologists, the Loop’s canyon walls are about 150 meters (500 feet) high, about the equivalent of a 50-story building. The lower canyon walls are part of the Hermosa Formation, a group of sedimentary rock layers that formed about 300 million years ago.

At the narrowest point, just 150 meters (500 feet) of rock separate the channels of the East Loop; the slightly wider neck of the West Loop measures about 520 meters (1,700 feet). As the Colorado River continues to erode the canyon wall, it will eventually punch through and create a new channel, leaving an oxbow lake and later a rincon.

Geologists say both ideas have some truth to them. In a study published in the Bulletin of the Geological Society of America, Deborah Harden, an emeritus professor of geology from San Jose State University, concluded that meanders like the Loop get their shape at least partly because of ancestral rivers. After considering factors such as the steepness of the river bed, the resistance of canyon walls to erosion, and the structure of bedrock near meanders, she found that areas that were relatively flat before the uplift had the most meanders then—and still do today.

But she also found the composition of the rock has some effect on the river’s bends as well. Broader meanders, for instance, are more common in areas with erodible rock, while cutoffs are concentrated in areas with transitions from harder to softer rock layers. 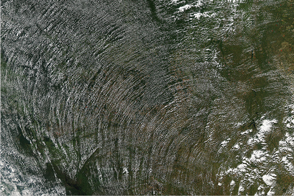