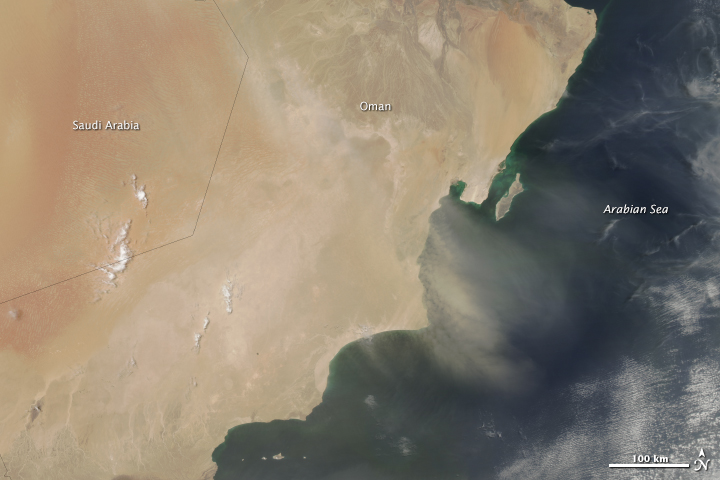 June 15, 2014, was destined to be a bad weather day for the people of Oman. For days, forecasters had been watching Tropical Cyclone Nanauk track northwest toward the country’s shores. It was expected to make landfall on June 15, but the advancing Southwest Monsoon intervened with winds that carried very dry Middle Eastern air into the core of Tropical Cyclone Nanauk. The storm fell apart.

Instead, strong northwesterly winds prevailed, so on June 15, many in Oman saw dust instead of rain and floods. The Moderate Resolution Imaging Spectroradiometer (MODIS) on NASA’s Aqua satellite acquired this image of the dust storm at 1:45 p.m. local time. The dust blurs land features and extends out over the Arabian Sea.

The winds and resulting dust reduced visibility, leading to warnings throughout the region. The winds also caused high waves in the Persian Gulf and Gulf of Oman.

Dust in the Middle East

Strong northwesterly winds filled the skies with dust in June 2014.

Dust Storm over Gulf of Oman

Dust Storm on the Gulf of Oman