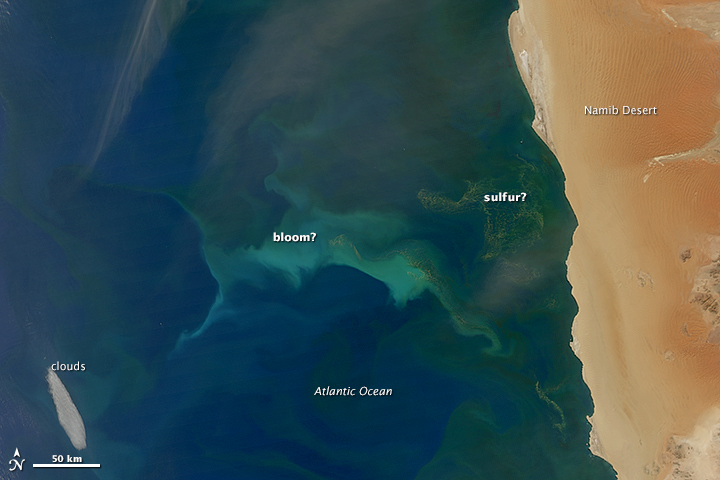 Off the coast of southwest Africa, ocean currents, winds, and the underwater shelf interact to create compelling biology and chemistry. Plant-like phytoplankton often bloom in the nutrient-rich surface waters, while bacteria on the seafloor consume decaying plant and animal matter and occasionally release gas that bubbles to the surface.

Just off the coast of Namibia, the Benguela Current flows along the ocean surface. It moves north and west along the coast from South Africa and is enriched by iron and other nutrients from the Southern Ocean and from dust blowing off African coastal deserts. Easterly winds push surface waters offshore and promote upwelling near the coast, which brings up cold, nutrient-rich waters from the deeper ocean. These interactions can make the ocean come alive with color.

The Moderate Resolution Imaging Spectroradiometer (MODIS) on NASA’s Aqua satellite captured this image of the waters off Namibia on April 10, 2014. (Click here for another image of the area on April 13.)

Near the shore, yellow-green features in the water suggest the presence of sulfur. Studies have described how bacteria in oxygen-depleted bottom waters consume organic matter and produce prodigious amounts of hydrogen sulfide. As that gas bubbles up into more oxygen-rich water, the sulfur precipitates out and floats near the surface. It can give off a potent rotten-egg smell and pose a toxic threat to fish.

Further offshore, milky green water may be a bloom of one or several species of phytoplankton. As countless microscopic, plant-like organisms consume sunlight and nutrients, they also consume oxygen. Oxygen depletion can sometimes become so complete that it creates a “dead zone” that can suffocate other marine species. At the same time, the oxygen-depleted waters help sulfur-producing bacteria to thrive. 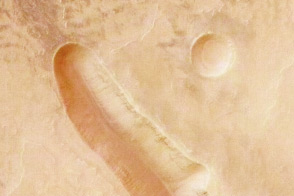 A flash of blue and green lit the waters off Namibia in early November 2007 as a phytoplankton bloom grew and faded in the Atlantic Ocean. The bloom stretches from north to south along hundreds of kilometers, though it is brightest in the center of this image. Such blooms are common in the coastal waters off southwest Africa where cold, nutrient-rich currents sweep north from Antarctica and interact with the coastal shelf. At the same time, the easterly trade winds push surface water away from the shore, allowing water from the ocean’s floor to rise to the surface, bringing with it iron and other material. The suffusion of nutrients from both the currents and upwelling water creates an environment where tiny surface-dwelling ocean plants (phytoplankton) thrive.