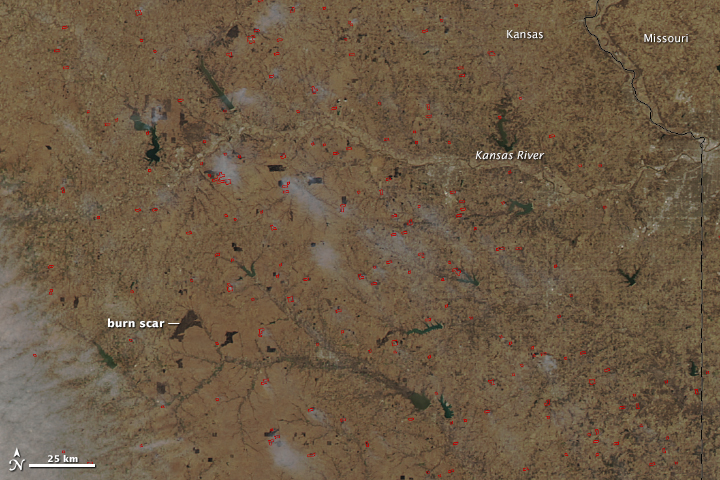 Fire is as much a part of the prairie landscape as grass. Before settlement, tallgrass prairie covered 170 million acres of North America from Texas to Canada. Frequent fires (ignited by native peoples or lightning) maintained the grassland, destroying shrubs and trees that would otherwise encroach on the land while letting native fire-adapted grasses thrive. Today, less than four percent of the prairie remains, mostly in eastern Kansas and Oklahoma, and fire is still a critical component of the ecosystem.

“We can’t have prairie without fire,” says Jason Hartman of the Kansas Forest Service. “Doing controlled burns is safer for the public than wildfires.“ While fires are helpful year-round, most prescribed burns occur in the spring, peaking in late March and April, as shown in the image above. Outlined in red, widespread fires were burning on March 29, 2014, when the Moderate Resolution Imaging Spectroradiometer (MODIS) on NASA’s Aqua satellite acquired the image. Freshly burned land is dark brown or black.

Because Kansas does not have a reporting system for prescribed burns and wildfires, it’s unclear just how much land burns every year, says Hartman. Satellite images help scientists assess how extensive fires are in a given year. The false-color image below, taken by Aqua MODIS on March 31, illustrates the extent of recent fires. The image includes both infrared and visible light so that newly burned land is dark red. 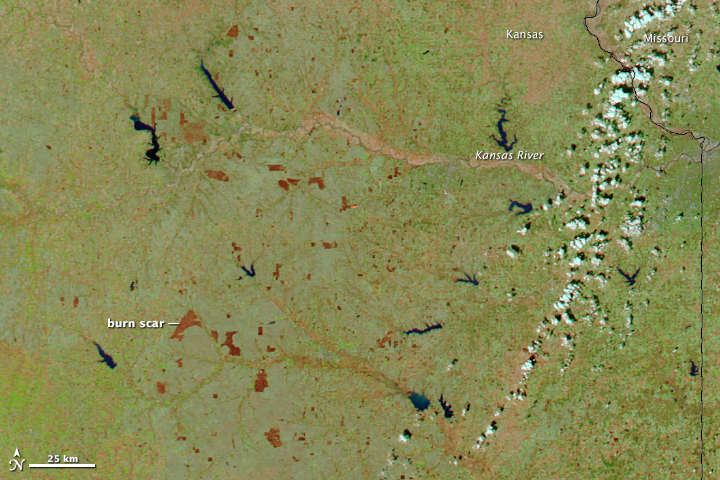 Fire has many roles in preserving the prairie. Fires remove old plant material, consuming dry, dead grass and woody shrubs and trees and returning nutrients to the soil. The burn exposes soil to the sunlight, and new grasses grow quickly in the warmed soil. Young plants are more palatable to grazing animals, including cows, buffalo, and deer. As a result, newly burned land attracts animals. Native Americans recognized this fact and used fire to bring game. Today, ranchers also use fire to improve rangeland for their cattle. The new plants are more nutritious and contain more protein, and so animals that graze on fire-controlled grassland are 10 to 15 percent larger.

Fire is also an inexpensive way to control invasive species, including the Eastern red cedar, without pesticides. While the tree does grow in Kansas and Oklahoma, fire has confined it to protected landscapes like sheltered ravines. If fires did not occur, the trees and other woody plants would quickly infiltrate the grassland. Within 30 years, the prairie would become a forest and grassland habitats would disappear.

Prairies can’t exist without fire, so burning is essential to preserving the last remaining tallgrass prairie in North America.