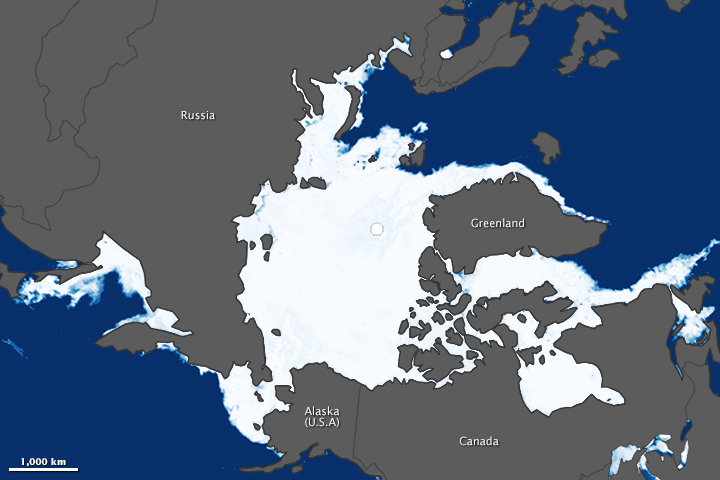 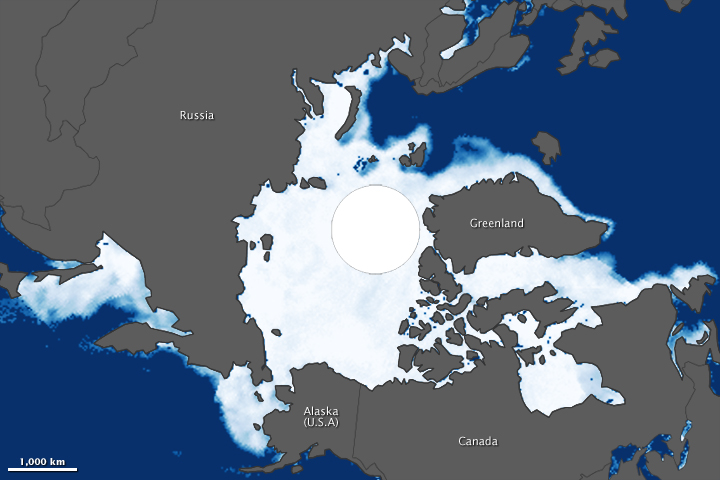 Arctic sea ice reached its annual maximum on March 21, 2014. And while the year was not extraordinary—the fifth lowest extent in 36 years of satellite records—the trend continues to be. The seven smallest ice extents in the Arctic have all occurred during the past seven years. There is strong evidence that the trend will continue.

According to the National Snow and Ice Data Center (NSIDC), Arctic sea ice extent reached 14.91 million square kilometers (5.76 million square miles) on March 21. Extent is defined as the total area in which the sea ice concentration is at least 15 percent. The season had been looking significantly worse until a strong Arctic Oscillation weather pattern dispersed and extended the ice in some regions. It was the fifth latest sea ice maximum on record; the average maximum occurs around March 9.

The maps above show Arctic sea ice extent on March 21, 2014 (top) and March 14, 1983 (bottom). According to NSIDC, the average maximum extent for 1979â€“2000 was 15.46 million square kilometers (5.96 million square miles). The 1983 maximum covered roughly that extent, so a comparison between 2014 and 1983 gives an idea of how conditions this year strayed from the long-term average. Turn on the image-comparison tool to see the differences.

Sea ice off of far eastern Russia (Sea of Okhotsk) and in the Barents Sea (between Scandinavia and the northern Russian island of Novaya Zemlya) was below average in 2014. Also, a sea ice feature known as the Odden ice tongue did not form off the northeast coast of Greenland (between Iceland and Svalbard). “This feature was quite common—especially during February and March from the 1970s through the 1990s—but has essentially disappeared more recently,” said Walt Meier, a cryosphere scientist at NASA’s Goddard Space Flight Center. “The Odden forms due to winds and currents that push cold water into the area, resulting in persistent, thin ice formation. It is important because it’s a region of deep water formation, part of the global thermohaline circulation.”

One positive from the 2013-14 winter is that multiyear ice is more extensive. From February 2013 to February 2014, multiyear ice increased from 30 percent to 43 percent (2.25 to 3.17 million square kilometers) in the Arctic basin. The total is still below the multiyear ice total in 2007, when the recent series of shrinking ice extents started. Furthermore, the percentage of the Arctic covered by ice that is at least five years old is just 7 percent, half of what it was in 2007.

The downward trend is likely to continue because the length of the melt season for Arctic sea ice has grown by nearly five days each decade, researchers from NSIDC and NASA reported in March 2014. The melt season is starting earlier and new ice formation is starting later each fall—the result of warmer ocean temperatures and increased sunlight hitting open water in the Arctic Ocean. The pattern feeds back on itself: thin ice is less reflective than thick, so it allows more sunlight to be absorbed by the ocean, making the ice still thinner and the ocean still warmer. Younger, thinner ice is also flatter, so it allows melt ponds to accumulate on the surface, reducing albedo and absorbing more heat.

The 2014 map was compiled from observations by the Advanced Microwave Scanning Radiometer 2 (AMSR-2) sensor on the Global Change Observation Mission 1stâ€“Water (â€œShizukuâ€) satellite, operated by the Japan Aerospace Exploration Agency (JAXA). The 1983 image was made from observations by the Scanning Multichannel Microwave Radiometer) on the Nimbus-7 satellite. The white circle over the pole is a data gap caused by how satellites fly close to but not directly over the poles. Wider coverage by AMSR-2 has shrunk the size of this gap. The area within the circle is ice-covered—an assumption confirmed by many surface expeditions—but researchers use an average of the ice just outside the gap to estimate the extent within. 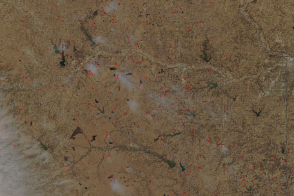