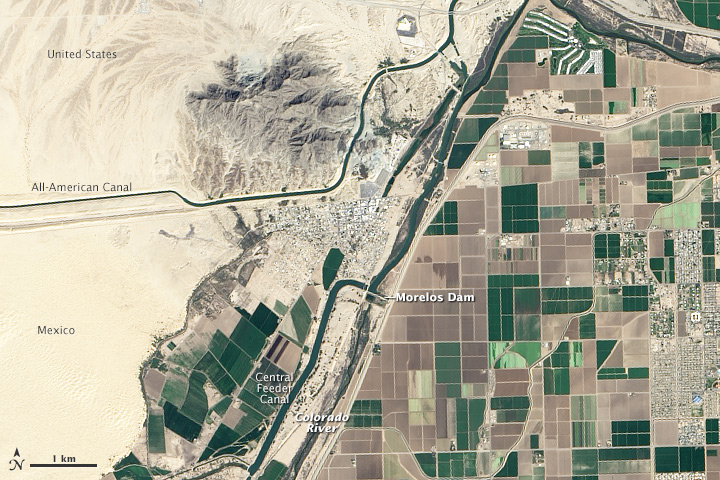 After canoeing through the Colorado River delta in 1922, naturalist Aldo Leopold described it as a landscape of a “hundred green lagoons.” Nearly a century later, canoes are no longer an option, and a more fitting description of the area would include the words “brown” and “parched.”

Due to increasing demand for Colorado River water by the United States and Mexico, the final stretch of the Lower Colorado has virtually disappeared. It has been decades since the Colorado flowed all the way through Mexico to the Gulf of California. Major spring floods are a rarity, and the lower reaches of the river only flow after rainstorms or when agricultural runoff drains into the dried riverbed.

The effects on the delta ecosystem have been profound. Willow and cottonwood forests that used to thrive along the Colorado’s banks and in its wetlands now struggle to survive, while a drought-adapted invasive shrub called salt cedar (tamarisk) dominates. Populations of birds and other animals have dwindled. According to ecologists, only 10 percent of the Colorado’s original wetlands remain, with just 3 percent of cottonwood and willow forests surviving.

On March 23, 2014, researchers and water managers plan to bring some water—and, hopefully, some life—back to the Lower Colorado River. The floodgates at a diversion dam near the U.S.-Mexico border will be opened, sending a pulse of water rushing toward the delta once again. The “pulse flow” from Morelos Dam is intended to simulate spring floods of the past. After the water subsides, ecologists expect to see a wave of green emerge, as the fresh water flushes away salts and helps cottonwood and willow seeds germinate.

Morelos, the southernmost dam on the river, straddles the border near Los Algodones, Sonora (Mexico), and Yuma, Arizona (U.S.). Storage dams upriver released water earlier this year, and the Morelos dam is the last barrier before the delta. The Operational Land Imager (OLI) on the Landsat 8 satellite captured this image of the area around Morelos Dam on March 8, 2014. Normally, all of the remaining river water at this point gets diverted into a canal, which is used to irrigate farms in northern Mexico. A small amount of water does seep around, causing a small flow in the river immediately south of the dam.

Before dams were built, approximately 18,500 million cubic meters (15 million acre-feet) of water flowed down the Colorado River to the Pacific Ocean each year. This year’s pulse flow—the product of an historic agreement called Minute 319—a total of 130 million cubic meters (105,000 acre-feet) of water will be released over an eight-week period. While small in comparison to the natural floods of the past, scientists think it will be enough to trigger some dramatic changes downstream.

Edward Glenn, an environmental scientist from the University of Arizona, is among a group of scientists who first argued that relatively modest pulse floods could have a major impact on downstream ecosystems. Glenn and colleagues analyzed decades of Landsat imagery and found that the willows and cottonwoods responded surprisingly well to sporadic floods that occurred in the 1990s during wet El Niño years.

Glenn plans to use Landsat 8 and other satellite imagery to monitor changes this time as well. “What we’re trying to do here is a really big deal,” he said. “Nobody has done an international restoration project using a pulse flow on such a large scale before.”