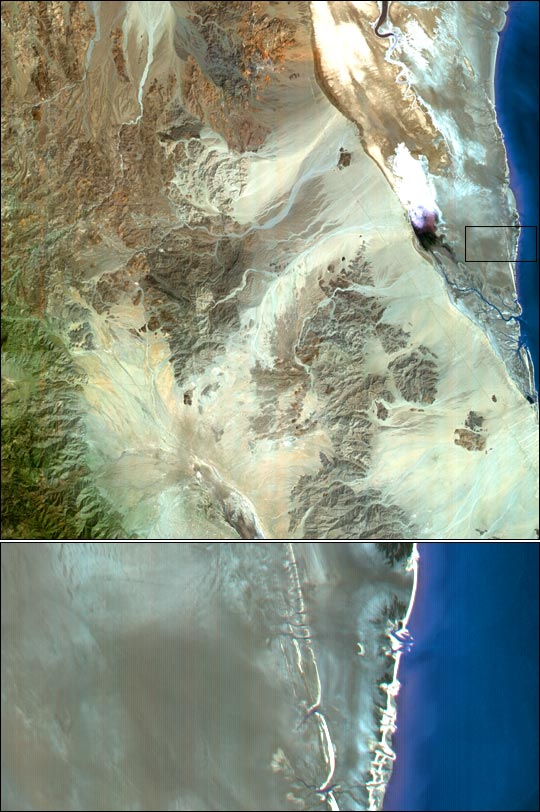 The above image of the lower eastern section of the Colorado River Delta was taken on September 8, 2000, by the Advanced Spaceborne Thermal Emission and Reflection Radiometer (ASTER) flying aboard NASA's Terra spacecraft. The Colorado River comes to an end just north and east of this image in Baja, California. The far northwestern shore of the Gulf of California can be seen in blue on the right hand side of the image. The gray expanse bordering the gulf are mud flats formed by sediments deposited over hundreds of years by the Colorado River. The large white patches to the left of the mud flats are highly reflective salt pans. Piles of dead shells accumulate along the southeastern portion of the mud flats. They make up ivory-colored beaches and mostly lie along the border between the gulf and the mud flats.

Karl Flessa, a paleontologist at the University of Arizona, explains that the appearance of these clamshell "islands" themselves is due to the damming and draining of the Colorado River. Most of the sediments that the Colorado River picks up as it moves through the American Southwest are now captured behind the Hoover Dam or the Glen Canyon Dam well before they reach the river delta. Without a steady supply of sediments, the mud flats have been slowly eaten away by the waters of the Gulf of California. Each day as the tide moves back and forth across the flats, the waters remove small sediments and expose old clamshells.

Flessa and his group are studying the clamshell "islands" to learn more about what the environment was like when the river flowed into the gulf. They employ Landsat 7 images much like the image shown above to locate old clam beds and find their way around the mudflats. Once there, Flessa explains he and his team scoop up large samples of shells and take them to a lab. By then isolating certain radioisotopes found in the shells, the scientists can determine how abundant clam shells were in the past and compare them to present day populations.

What the scientists have uncovered so far is that over the past century the number of living clams in the delta has decreased by 95 percent. Flessa explains that the reduction of clams is due to the increased salinity and lower nutrients in the delta region. Most of the clams that lived in the delta thrived in a salt water/fresh water mix. When the river stopped flowing into the gulf, the waters became briny and the clams died. Since the clams were near the bottom of the food chain, it's likely that a large portion of the larger animals in the region vanished as well.

For more information about the Colorado River Delta, see the image from March 26, 2001