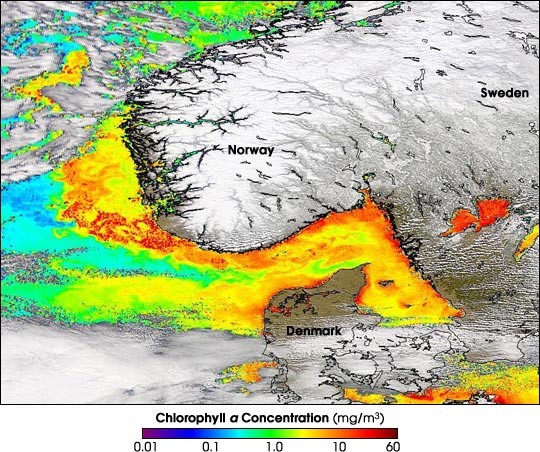 As a part of the European Union's ongoing research project entitled LIFECO (Linking hydrographic Frontal activity to ECOsystem dynamics), scientists are using real-time imagery from the Sea-viewing Wide Field-of-view Sensor (SeaWiFS) to monitor the development of the spring phytoplankton bloom in the North Sea and Skagerrak. These data are used to in conjunction with ship-based measurements of the annual bloom.

In the course of monitoring the spring bloom of diatoms in the region, scientists detected a second, harmful algal bloom (called Chattonella) off the southern coast of Norway on March 19, 2001. This harmful algal bloom appears to have been carried by currents westward from the Swedish coast of the Kattegat to the Norwegian coast where it has already killed more than 1,000 tons of salmon in fish farms during the past week. Norway is the world's top producer of Atlantic salmon, yielding about 400,000 tons per year.

SeaWiFS, which flies aboard the OrbView-2 satellite, precisely measures ocean color (even variations of color so slight our eyes cannot perceive the difference), which enables scientist to accurately estimate the concentrations of sediments, organic materials, or even phytoplankton at the surface. In the latter case, to be more precise, SeaWiFS measures the concentration of chlorophyll-a, the green pigment found in phytoplankton.

In the false-color image above, red pixels represent the areas with the greatest concentrations of chlorophyll-a (more than 10 milligrams per cubic meter), yellows show high concentrations (about 3 mg/m3), greens and turquoise pixels show intermediate values (0.3 to 1 mg/m3), and blues and purples show where there is little or no abundance of chlorophyll-a. Note the very high values along the southern coasts of Sweden and Norway, extending westward into the North Sea.

It should also be noted that while SeaWiFS can accurately measure chlorophyll-a concentrations, it cannot yet be used to distinguish between species of phytoplankton. So, without the aid of surface-based measurements, it is not possible to pinpoint which parts of the bloom in this image are the harmful algal bloom and which are the benign bloom of diatoms.

Image provided by the SeaWiFS Project, NASA/Goddard Space Flight Center, and ORBIMAGE. Note: All SeaWiFS images and data presented or referred to in this email message are for research and educational use only. All commercial use of SeaWiFS data must be coordinated with ORBIMAGE.