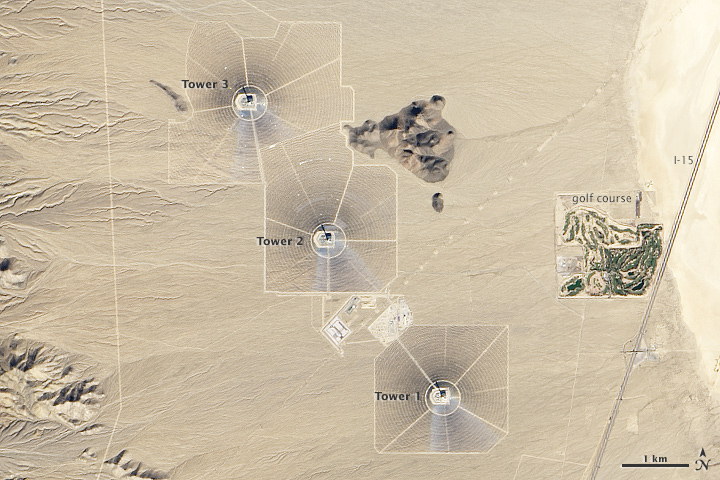 On December 25, 2013, the Operational Land Imager (OLI) on the Landsat 8 satellite acquired this natural-color image of Ivanpah Solar Electric Generating System in California. The three towers and surrounding arrays of mirrors stand just outside Mojave National Preserve, a few kilometers from the Nevada border and 65 kilometers (40 miles) from Las Vegas.

The new solar power plant sits within an alluvial fan in Ivanpah Valley on public land that sees 330 to 350 sunny days per year. Operators say they can generate up to 377 megawatts of electricity, enough to power more than 140,000 homes. After four years of construction, the power station officially opened in February 2014. Ivanpah has been called the largest solar thermal power tower system in the world. Smaller, similar systems have previously been constructed in Spain and Germany.

At Ivanpah, more than 170,000 heliostats (steerable pairs of mirrors) are spread out over 13 square kilometers (5 square miles). The heliostats rotate and change angles to focus sunlight on the central towers, which stand 140 meters (460 feet) tall. The sunlight heats water flowing through the towers to nearly 540°Celsius (1,000°Fahrenheit). That steam drives turbines that generate electricity.

The solar plant operators assert that Ivanpah will reduce carbon dioxide emissions by 400,000 tons per year. Conservation groups have voiced concerns about lost habitat for species (such as the desert tortoise) and about threats to birds, which can be harmed or killed by the intense heat above the mirror arrays.

Editor’s Note: This caption has been revised to better convey the location of the solar plant. 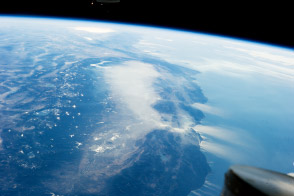