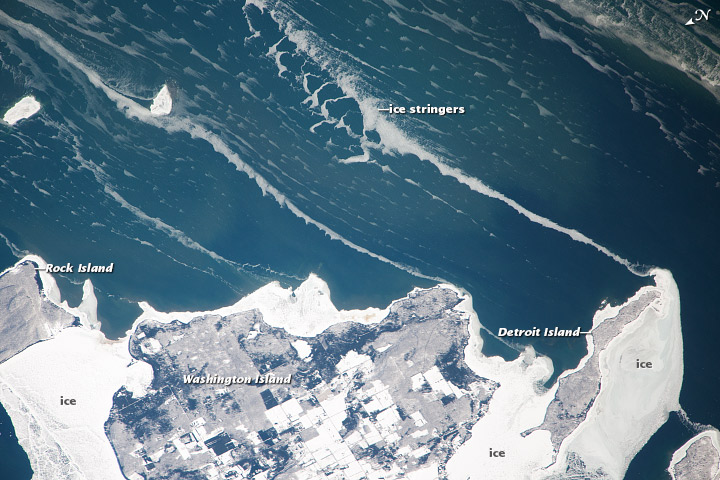 Snow-covered fields appear as geometric patterns on Lake Michigan’s Washington Island in this photograph taken by the crew of the International Space Station. The island is 9 km long (5.6 miles) and lies on Lake Michigan’s western shore, as a continuation of Wisconsin’s Door Peninsula. (Note that north is to the lower left in the image.)

White coastal ice hugs the shoreline and connects Washington Island with Detroit Island and Rock Island. Ice typically accumulates first near land, where cooling is more rapid than in deeper lake water. Two other snow-covered islands (image top left) are small enough and far enough from land to evade the collars of ice.

On the day this image was taken, southwesterly winds were blowing ice into the lake in the form of long, coherent stringers. The thickness of a stringer is related to the length of coastline that feeds it. The smallest northern stringer (image left) is fed by the shortest section of upwind coastline, and the longest (image right) is supplied by the large amount of shore ice around Detroit Island. These dominant winds keep a narrow zone (along the western shore of the lake) clear of ice, even as accumulations in the winter of 2014 reach the highest levels ever recorded in Lake Michigan.

Astronaut photograph ISS038-E-57977 was acquired on February 22, 2014, with a Nikon D3X digital camera using a 1000 millimeter lens, and is provided by the ISS Crew Earth Observations Facility and the Earth Science and Remote Sensing Unit, Johnson Space Center. The image was taken by the Expedition 38 crew. It has been cropped and enhanced to improve contrast, and lens artifacts have been removed. The International Space Station Program supports the laboratory as part of the ISS National Lab to help astronauts take pictures of Earth that will be of the greatest value to scientists and the public, and to make those images freely available on the Internet. Additional images taken by astronauts and cosmonauts can be viewed at the NASA/JSC Gateway to Astronaut Photography of Earth. Caption by M. Justin Wilkinson, Jacobs at NASA-JSC.

Southwesterly winds pull strands of land-fast ice out into the lake from Washington Island and Detroit Island.

In 2003 a colder than normal North American winter saw the entire surface areas of Lakes Superior, Huron, and Erie frozen over for the first time in years. Although the open surface waters of Lake Michigan did not freeze this season, the southern portion experienced a higher than normal amount of ice. Winds and currents drove broken pieces of ice from the north to the south. This image taken from the International Space Station shows a number of large pieces of ice collected along and just off the shoreline southwest of Benton Harbor, Michigan. Smaller pieces trail northward offshore from Chicago, Illinois. Note the ice accumulation along the entire eastern shoreline of Lake Michigan as well as the wind-drive lake-effect snow cover over the western half of the lower Michigan Peninsula.