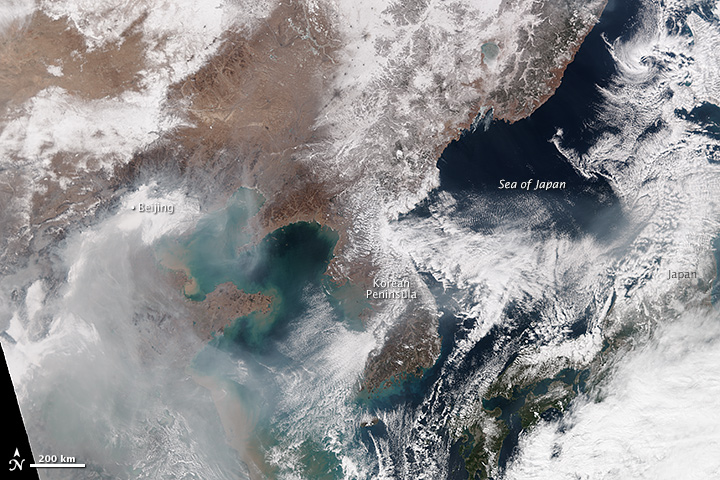 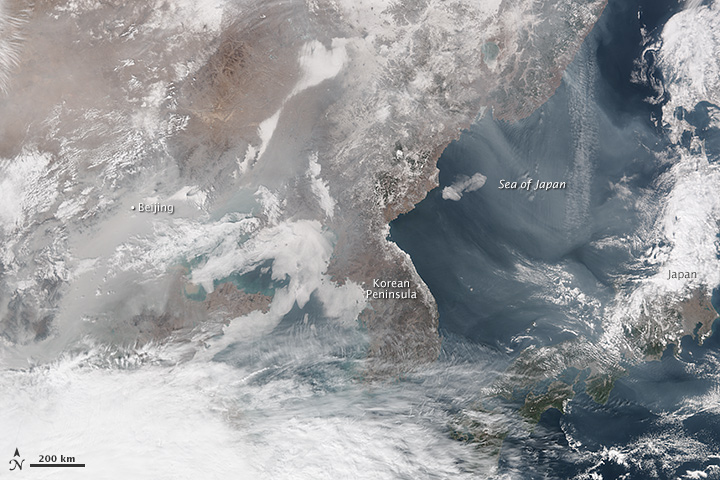 An all-too-common winter weather pattern settled over northeastern China over the past two weeks, letting air pollution build to hazardous levels. A temperature inversion trapped pollution near the ground, making particulate measurement soar. On February 24 and 25, 2014, the China Meteorological Administration issued an orange alert for air quality, warning of visibility below 2,000 meters and recommending that people stay indoors or wear a mask while outdoors in the North China Plain, including Beijing.

The haze limited visibility from space, too. The Visible Infrared Imaging Radiometer Suite (VIIRS) instrument on the Suomi NPP satellite captured the development of the pollution event and its transport across eastern Asia. The top image shows February 20, when the haze was confined to the North China Plain. The lower image offers a view from February 25, when the haze had thickened over China and extended north and east over Korea, the Sea of Japan, and Japan.

Fine particulate pollution (PM 2.5) is a health hazard because it is small enough to penetrate the lungs. In the short term, it can cause respiratory irritation and shortness of breath, trigger asthma attacks, and reduce lung function. Long-term exposure to particular pollution can lead to heart disease, stroke, and lung disease, including lung cancer.

NASA Earth Observatory image by Jesse Allen, using VIIRS data from the Suomi National Polar-orbiting Partnership. Suomi NPP is the result of a partnership between NASA, the National Oceanic and Atmospheric Administration, and the Department of Defense. Caption by Holli Riebeek.