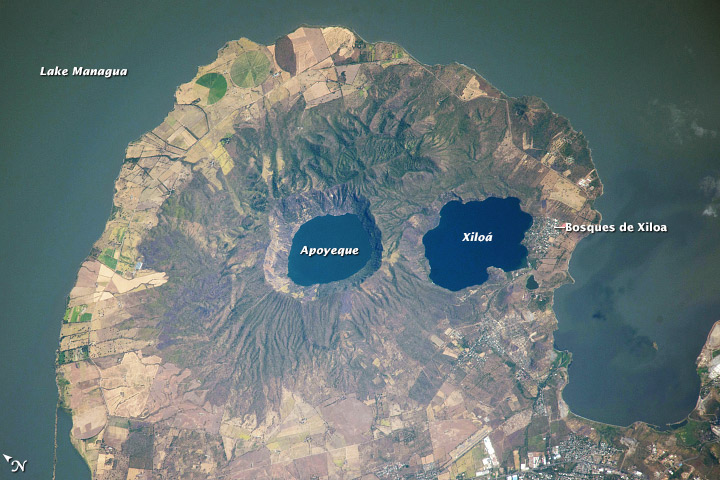 The Chiltepe Peninsula, highlighted in this photograph by an astronaut on the International Space Station, extends into Lake Managua in west-central Nicaragua. The peninsula was formed from part of a large ignimbrite shield, a geologic structure created when mostly low-density materials (such as pumice) are ejected during violent, explosive eruptions. Ignimbrite deposits are most commonly laid down during large pyroclastic flows, gravity-driven mixtures of rock, ash, and volcanic gases. Ignimbrite shields form through successive flows over geologic time.

The Apoyeque caldera—which is filled with a 2.8 kilometer (1.7 mile) wide and 400 meter (1,300 foot) deep lake—dominates the center of the Chiltepe Peninsula. Geological evidence indicates that Apoyeque last erupted around 50 BCE (plus or minus 100 years). The Laguna Xiloa maar—a volcanic crater formed by the explosive interaction of magma and groundwater—is located to the southeast of Apoyeque and is also filled with a lake. (Note that north is to the left in this photo.) Laguna Xiloa last erupted approximately 6,100 years ago.

More recently, a swarm of small earthquakes was detected near Apoyeque in 2012. These seismic swarms, when detected in volcanically active areas, can indicate movement of magma prior to an eruption. The capital city of Managua, not visible in the image, is located approximately 15 kilometers (9 miles) to the southeast of Apoyeque, while the town of Bosques de Xiloa is considerably closer (approximately 4 kilometers, or 2.5 miles).

Astronaut photograph ISS038-E-35123 was acquired on January 21, 2014, with a Nikon D3X digital camera using a 1000 millimeter lens, and is provided by the ISS Crew Earth Observations experiment and Image Science & Analysis Laboratory, Johnson Space Center. The image was taken by the Expedition 38 crew. It has been cropped and enhanced to improve contrast, and lens artifacts have been removed. The International Space Station Program supports the laboratory as part of the ISS National Lab to help astronauts take pictures of Earth that will be of the greatest value to scientists and the public, and to make those images freely available on the Internet. Additional images taken by astronauts and cosmonauts can be viewed at the NASA/JSC Gateway to Astronaut Photography of Earth. Caption by William L. Stefanov, Jacobs at NASA-JSC.

This astronaut photograph shows ash streaming from Karymsky Volcano, and nearby Karymsky Lake—the water-filled remnant of an ancient eruption.