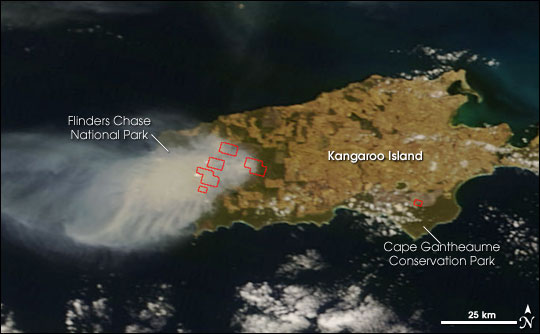 Off the southern coast of Australia, not far from the city of Adelaide, is Kangaroo Island. Five times the size of Singapore, this island is known for its abundant wildlife. In December 2007, as the Australian summer began, wildfires threatened both the island’s wildlife and many of its human inhabitants. The Moderate Resolution Imaging Spectroradiometer (MODIS) on NASA’s Terra satellite captured this image on December 12, 2007, after the fires had already burned for several days.

In this image, red outlines mark areas where the satellite sensor detected scorching conditions associated with wildfires. One fire, near Cape Gantheaume Conservation Park, emits negligible smoke. In Flinders Chase National Park, however, thick smoke from the fires completely obscures the view of the land surface. The thick smoke blows westward over the ocean. Where not hidden by smoke or isolated clouds, the island’s surface appears in shades of brown and brownish-green, especially Gantheaume Conservation Park.

According to The Sydney Morning Herald, fires along the northern and southern coast of Kangaroo Island had been largely contained by December 12. In contrast, the bushfires in Flinders Chase National Park had already consumed 11,000 hectares (about 27,000 acres) and continued burning. The weather forecast called for increased winds and warmer temperatures, expected to exacerbate the blaze. Collectively, the fires that burned on Kangaroo Island during the previous week had scorched more than 30,000 hectares (74,000 acres) and claimed at least one human life.