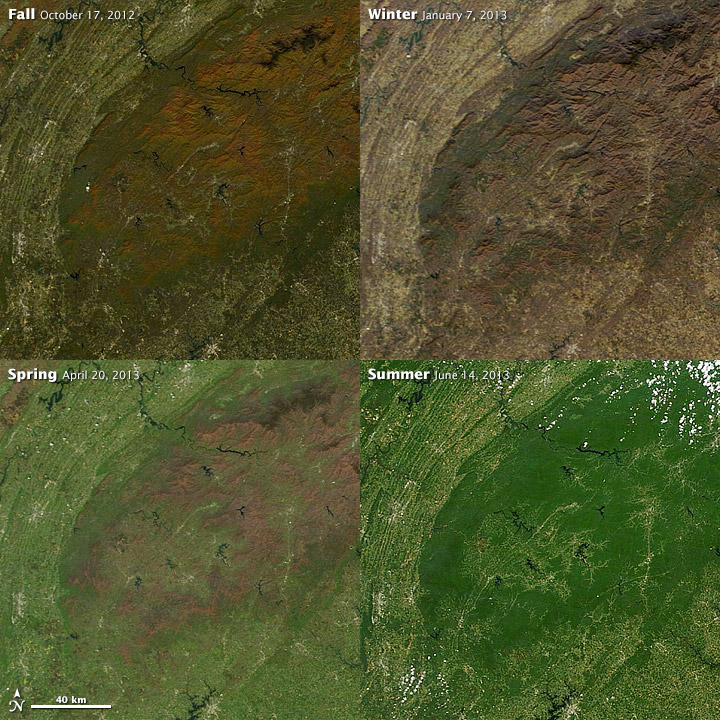 Individual deciduous trees mark the turning of the seasons with pale buds in the spring, densely packed green leaves in summer, vibrant red, orange, or yellow tones in fall, and bare branches in the cold of winter. Forests also mark the changes, but on a grander scale. In this series of images from the Moderate Resolution Imaging Spectroradiometer (MODIS) on NASA’s Terra satellite, forests mark the time along the southern ridges of the Appalachian Mountains, where the states of North Carolina, Tennessee, Georgia, and South Carolina all come together.

The area shown in the images include different types of land cover, such as hardwood forests, pine and oak forests, and farm or grassland. Each reacts in its own way to the advancing seasons. The most striking change occurs in the hardwood forest that covers the ridges. The forest in this region is widely intact, preserved as part of Great Smoky Mountains National Park and a series of state and national forests. The forest stands out most clearly in the fall, when the maple and birch trees take on tones of orange. The loss of leaves in the winter makes it possible to see the underlying ridgelines and valleys with greater clarity.

The pine and oak forests that grow in drier areas, particularly on the west side of the mountains, remain green throughout the year. They are easiest to identify in the fall and winter, when everything else is brown, yellow, or orange.

The non-forested area beyond the mountains varies greatly in color. White and gray areas are cities; Dalton, Georgia, and Cleveland, Tennessee (on the left side of the image) are the most obvious. Farmland shifts from pale green in the spring, to a brighter shade of green or gold during the summer and fall, and to brown in the winter.

The four images illustrate why it is critical to pay attention to the date and season of a satellite image when you try to interpret what you see. Seasons can completely alter the appearance of a landscape. Read more at How to Interpret a Satellite Image.

Time transforms the ranges in the southern Appalachian Mountains through the course of a year.