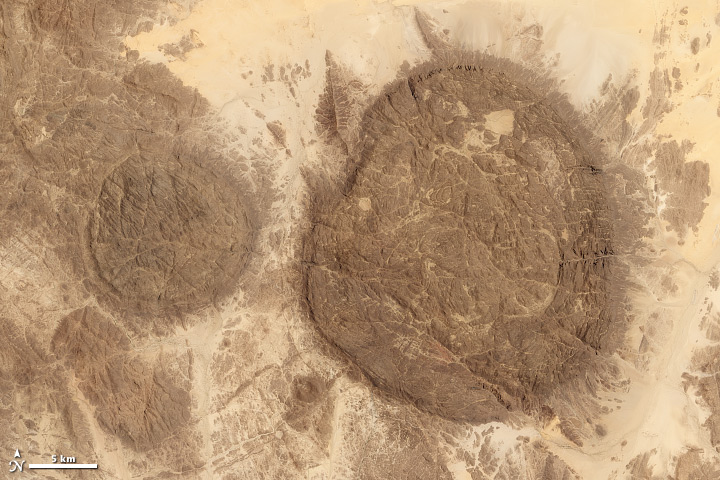 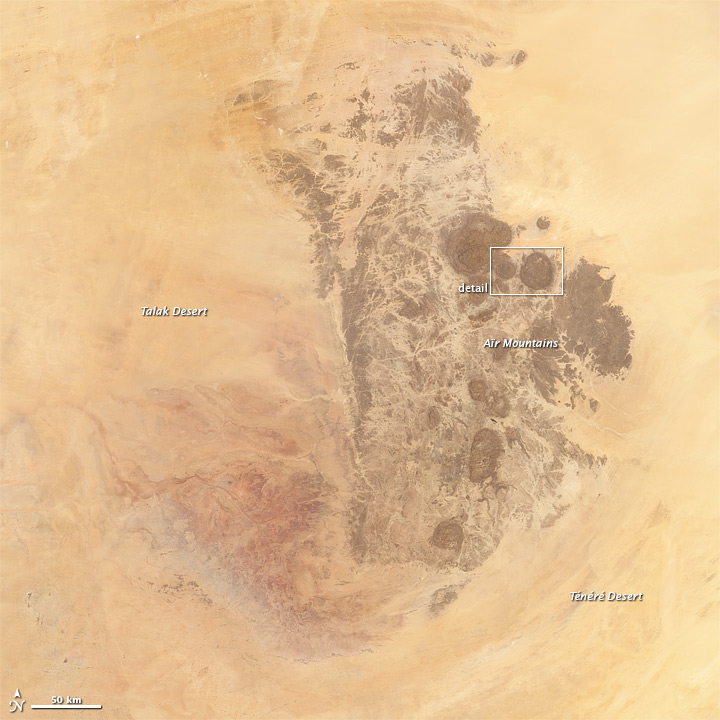 The dark round domes of the Aïr Mountains rise out of the Sahara Desert, a chain of islands in a sea of sand. Geologically, the mountain massif in Niger is not that different from an island. It formed when magma flowed in to pre-existing cracks and caverns in the bedrock, a geologic formation called a dike. The bubble-shaped mounds are ring dikes, which formed when the ceiling of a magma chamber collapsed, leaving a circular crack that was later filled with magma. Through time and the constant movement of Earth's crust, these magma intrusions have been lifted and moved together, an isolated piece of geology different from its surroundings. The mountains are now 2,000 meters (7,000 feet) tall.

These images show both the unique geology of the ring dikes and the relative isolation of the formation. The Operational Land Imager on the Landsat 8 satellite acquired the top image on May 26, 2013. Cracks cross the rock formation, a product of weathering and faulting. The Moderate Resolution Imaging Spectroradiometer (MODIS) on NASA’s Terra satellite acquired the lower image on May 25, 2013. This view provides wider context, showing how different the mountains are from their surroundings. (The formation looks even more isolated in this astronaut photo taken on March 23, 2010, just before a dust storm blanketed the mountains.)

The Aïr Mountain Range is an ecological island too, supporting life naturally found in the African Sahel while being surrounded by the shifting sand dunes of the Sahara Desert. A wide variety of habitats—including dunes, stony deserts, cliff valleys and canyons, plateaus, and water holes—host 40 species of mammals, 165 species of birds, 18 species of reptiles, and 1 species of amphibian. The area provides prime habitat for three desert antelope species: the Dorcus gazelle, the Slender-horned gazelle, and the critically endangered Addax. In fact, part of the region is a sanctuary for the world’s largest population of wild Addax.

The diversity found in the Aïr Mountains extends to plant life as well, with pockets of relict ecosystems that survive in few other places. Wild Sahelian plants include species of acacia and palms. Mediterranean plants like wild olives grow above 1,000 meters. The area also supports the wild relatives of common crops such as millet and sorghum.

These native plants and animals have survived in the Aïr Mountains because they are mostly isolated from human inhabitants. Just 3,500 to 7,000 people live in the area, though Paleolithic and Neolithic archeological sites attest to the fact that people have long made the desert oasis home. In 1992, the site was inscribed as a World Heritage Site called the Aïr and Ténéré Natural Reserves. The site covers 7,736,000 hectares (30,000 square miles), making it the largest protected area in Africa. It covers both the Aïr Mountains and the plain of the Ténéré desert, which includes live, shifting sand dunes. 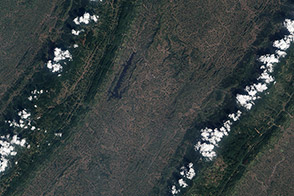