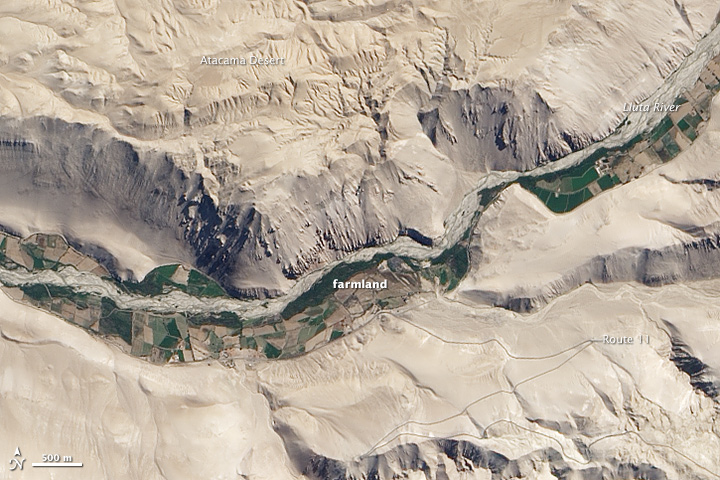 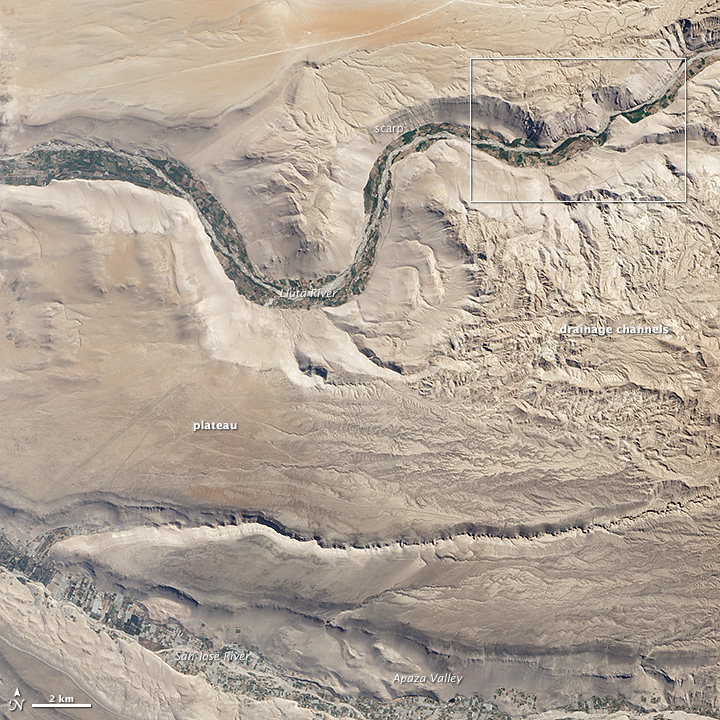 A remote plateau in far northern Chile is not a place you want to be without water. Large sections of the Atacama Desert—often called the driest place on Earth—receive less than a millimeter of rain per year.

The town of Arica—which lies along the Pacific coast, about 15 miles (24 kilometers) west of the area shown here—has the lowest average precipitation of any city in the world. Arica survives on just .03 inches (0.8 millimeters) of rain per year, about 75 times less than what California’s Death Valley receives.

The barren nature of the landscape was on full display on July 19, 2012, when the Advanced Land Imager (ALI) on NASA’s Earth Observing-1 satellite acquired this image. Although a few types of cacti and other drought-tolerant species can survive in the Atacama, surfaces appear vegetation-free from ALI’s perspective, leaving a veneer of tan to dominate the image.

The exceptions, of course, are the explosions of green in the canyons, which were carved by the Lluta and San José rivers. Both rivers flow toward the Pacific Ocean and have headwaters to the east, in the foothills of the Andes. Glaciers on Tacora, a stratovolcano to the northeast, provide enough water for the Lluta to flow year round, making it one of the few rivers in the area that does.

Distinct blocks of green color the bottom of the Lluta and Apaza Valleys, the product of irrigation by residents of the small farming villages nestled in the canyon bottoms. Despite the seemingly lush fields, farmers in the Lluta Valley face serious water quality problems. In addition to being quite saline and acidic, the Lluta River contains dangerously high levels of boron, arsenic, sulfate, and other undesirable substances that flow into the river from natural geothermal springs and upstream mining operations.

Due to the poor water quality, farmers who irrigate with Lluta River water can only use it for pastureland or for a few tolerant crops, such as onions and potatoes. The water woes have left the area struggling economically and reliant on bottled drinking water from the Chilean government. In contrast, the clean waters of the San José River a few kilometers to the south, which carved Apaza Valley, support a broad range of high-quality crops, particularly olives.

The steep slopes, or scarps, that form the Lluta Valley’s walls make reaching the valley floor from the plateau a challenge. Route 11 provides one of the few access points near the village of Churina. The complicated network of drainage channels that join the river from the east lessened the slope on the southern wall, making it easier to build the road.

Water running off a massive amphitheater-shaped scarp a few kilometers east—the product of a giant landslide known as the Lluta Collapse—created the distinctive drainage pattern. The landslide, one of the oldest known slides in the world, occurred at least 2.5 million years ago and displaced 25 cubic kilometers of material.

The Lluta River provides a lifeline of water to one of the driest places in the world. However, the water is steeped with arsenic and boron. 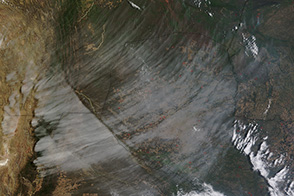 A gallery of images that were puzzler answers. Read more about the puzzler here. 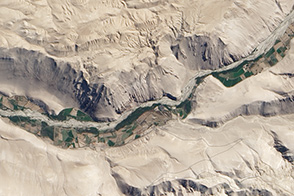