Early Blizzard a Disaster for Cattle 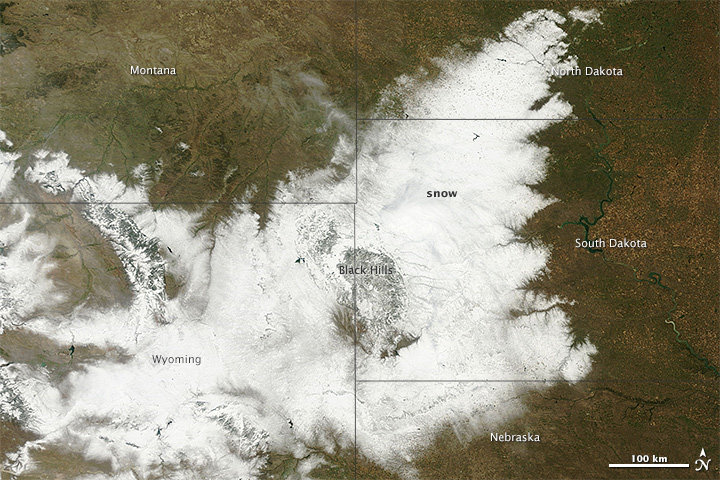 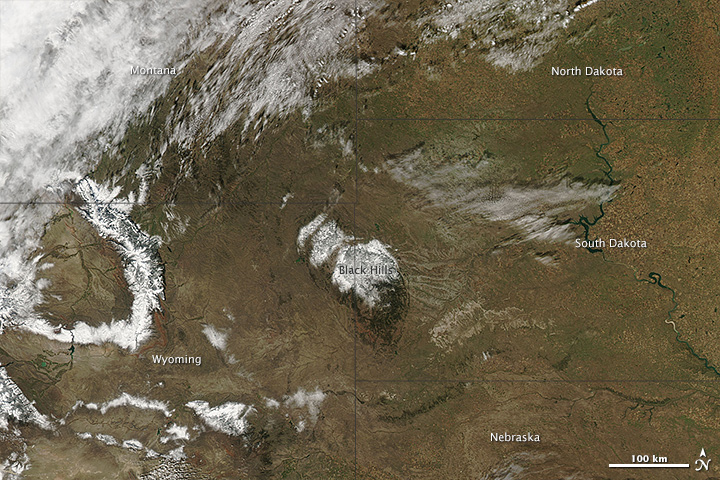 Between October 3–5, 2013, an unusually early blizzard smothered northeastern Wyoming and western South Dakota with wet, heavy snow—not to mention rain, hail, thunderstorms, and even tornadoes. In South Dakota’s Black Hills, the storm dropped more than three feet (90 centimeters) of snow in some areas, knocking out power for about 25,000 people and killing tens of thousands of cattle.

Cattle—which had not yet grown the thick winter coats that allow them survive winters—were grazing in unprotected summer pastures when the storm hit. Many animals simply froze to death or suffocated after being soaked by freezing rain and then buried by snow. About 15 to 20 percent of South Dakota’s cattle may have been killed, according to the South Dakota Growers Association. Warmer weather and rain right after the blizzard then complicated cleanup efforts, melting much of the snow and leaving farms coated with so much mud that fields and roads were impassable for days.

The Moderate Resolution Imaging Spectroradiometer (MODIS) on NASA’s Terra satellite acquired an image (top) of the snowfall on October 6, 2013. A swath of fresh snow stretches from western Wyoming and northern Nebraska through western South Dakota into the southwestern corner of North Dakota. The Black Hills, though they received some of the heaviest snow, appear slightly darker because they are forested. As seen by a MODIS sensor on Aqua, only the Black Hills remained coated in white by October 16.

In early October, a freak snowstorm killed thousands of cattle in South Dakota. Warm and soggy weather following the storm made the cleanup a muddy mess.