In most cases, the most toxic pollution lingers for a few days or even weeks, bringing increases in respiratory and cardiac health problems at hospitals. Eventually the weather breaks, the air clears, and memories of foul air begin to fade. But that’s not to say that the health risks disappear as well. Even slightly elevated levels of air pollution can have a significant effect on human health. Over long periods and on a global scale, such impacts can add up.

But exactly how much exposure to air pollution do people around the world get? And how much health damage is it causing? Since there are gaps in networks of ground sensors, University of North Carolina earth scientist Jason West is leading an effort to answer those questions using computer models that simulate the atmosphere.

In 2010, West and colleagues published an estimate of the global health effects of air pollution based on a single atmospheric model. More recently, West and colleagues thought they could improve their calculations by using results from a range of atmospheric different models—six in all—rather than relying on just one. In 2013, they published their results in Environmental Research Letters, concluding that 2.1 million deaths occur worldwide each year as a direct result of a toxic type of outdoor air pollution known as fine particulate matter (PM2.5).

The map above shows the model estimate of the average number of deaths per 1,000 square kilometers (386 square miles) per year due to air pollution. The researchers used the difference in pollution levels between 1850 and 2000 as a measure of human-caused air pollution. Dark brown areas have more premature deaths than light brown areas. Blue areas have experienced an improvement in air quality relative to 1850 and a decline in premature deaths. Fine particulate matter takes an especially large toll in eastern China, northern India, and Europe—all areas where urbanization has added considerable quantities of PM2.5 to the atmosphere since the start of the Industrial Revolution. 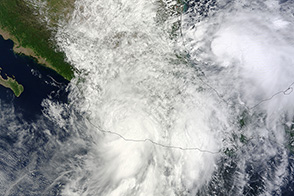