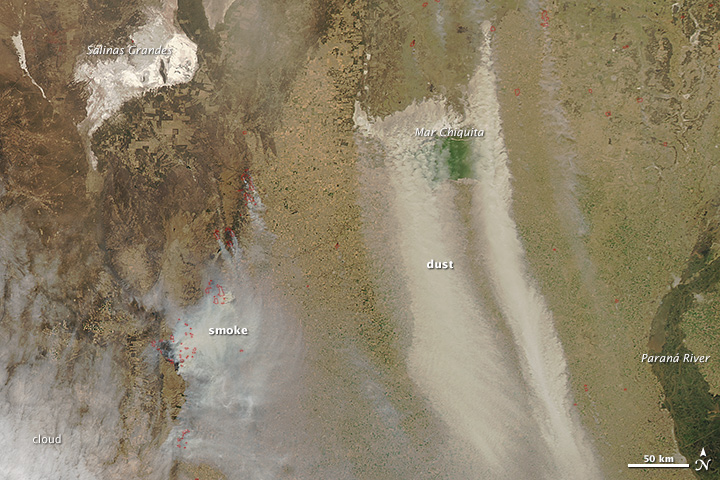 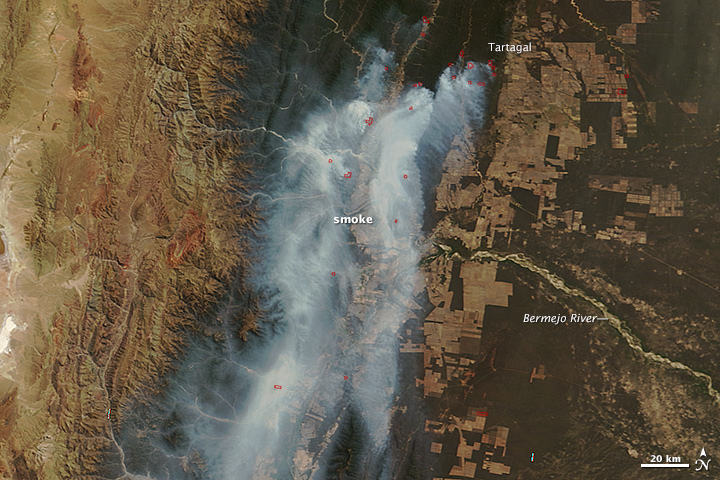 Strong winds, high temperatures, and months of drought fueled an outbreak of wildfire in northern Argentina in September 2013. The fires burned mainly in forests, shrublands, and grasslands that are part of arid chaco and espinal ecosystems.

On September 10 and 11, 2013, the Moderate Resolution Imaging Spectroradiometer (MODIS) on NASA’s Aqua and Terra satellites observed fires burning in northern Argentina. The top image shows burning near Mar Chiquita, a shallow saline lake. The bottom image shows fires about 700 kilometers (400 miles) to the north, in a forested area near Tartagal.

The most-severe blazes struck Córdoba, the second most populous Argentine province. As of September 11, the fires had destroyed 40 homes, forced the evacuations of more than 500 people, and charred about 20,000 hectares (77 square miles) of forests and grasslands.

Wildfires are fairly common in the late-winter and early-spring in northern Argentina, particularly during dry years. Many fires are set intentionally by ranchers to improve the quality of cattle forage, according to a 2012 study that analyzed patterns of fires detected by MODIS.

On September 10, 2013, MODIS also observed a large plume of dust blowing south from Mar Chiquita. When full, the lake covers roughly 5,770 square kilometers (2,230 square miles), but it can shrink to less than half of that during periods of extended drought.

As water levels drop, winds can pick up fine sediments—dust and salt—from around the lake perimeter and transport them long distances. In this case, the dust plumes extended for hundreds of kilometers (visible in the large image).

Fires destroyed dozens of homes in Argentina during September 2013. 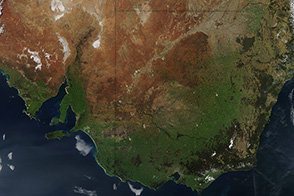 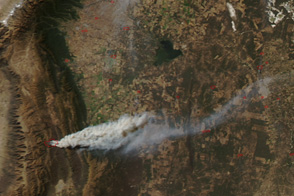 Fires are scattered across the Gran Chaco in this image of northern Argentina taken on July 25, 2011.