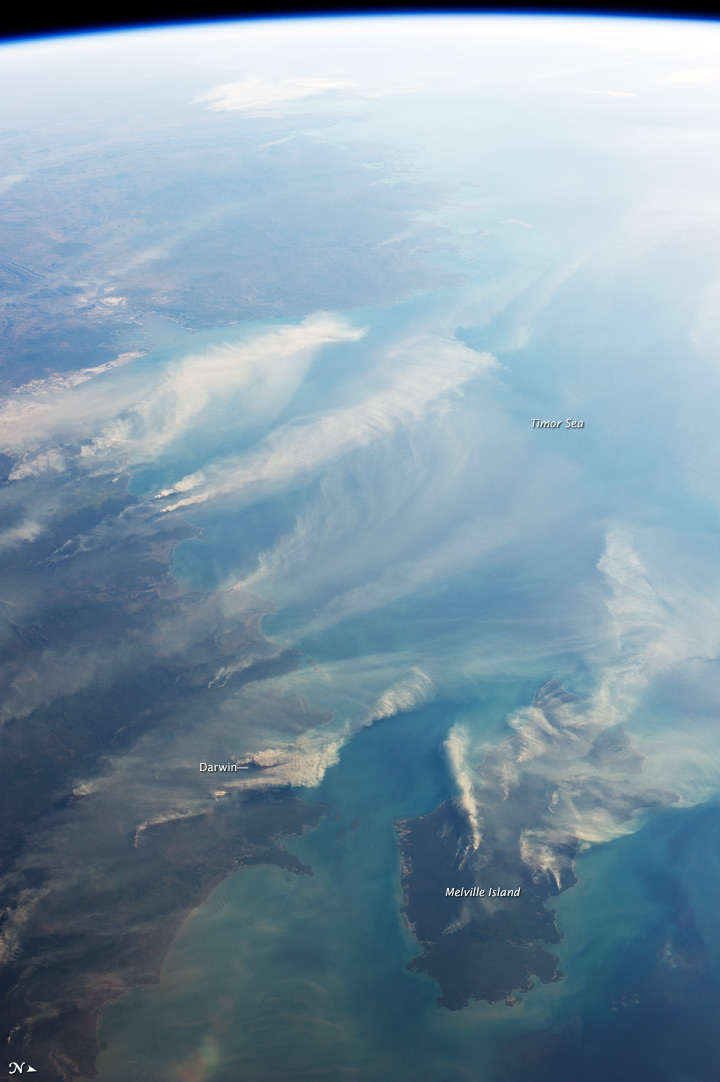 One of the first things astronauts noticed when they rode into space in the 1960s was the smoke plumes. Fires, volcanoes, and pollution were all reaching high into the atmosphere and stretching much farther than the human imagination had fathomed. Five decades later, the views are not as novel but still spectacular. And they are useful reminders of how events in one place on the planet can have effects far from the source.

Astronaut Karen Nyberg shot this photograph on August 5, 2013, while looking west across the Timor Sea from the International Space Station (ISS). (North is to the right in the image.) Note how the smoke near Darwin is blown by southeasterly winds (pushing it to the northwest), while the winds over Melville Island are mostly blowing to the southwest (influenced by the interaction of land and sea breezes and other local effects). Nyberg also shot a photo of the same area while looking straight down.

According to Australian fire researcher Peter Jacklyn, many of the fires on Melville Island were likely prescribed burns, designed to clear brush and dry fuel to prevent more serious wildfire as the weather warms. The fires near Darwin, however, were probably wildfires, given that most prescribed burning in the area is usually done earlier in the year.

Australia’s Northern Territory is in the midst of the dry season, notes Jacklyn, a scientist at the Centre for Bushfires Research at Darwin University. The season lasts from roughly May to September, and rainfall barely exceeds 10 millimeters (0.4 inches) for the month in August. Though the region sits well within the tropics, the relative afternoon humidity hovers around 30 to 40 percent in August, with maximum temperatures in the low 30s Celsius (85 to 95 Fahrenheit).

Fire researchers mostly rely on nadir, or straight-down, satellite views of fires because the images can be overlaid on traditional maps for the sake of studying hot spots and burn scars. But oblique views like the photo from Nyberg can be useful for studying plume structures. They are also incredibly useful, Jacklyn notes, for “communicating to people the impact and prevalence of fires.”

Astronaut photograph ISS036-E-29323 was acquired on August 5, 2013, with a Nikon D3S digital camera using a 50 millimeter lens, and is provided by the ISS Crew Earth Observations experiment and Image Science & Analysis Laboratory, Johnson Space Center. The image was taken by the Expedition 36 crew. It has enhanced to improve contrast. The International Space Station Program supports the laboratory as part of the ISS National Lab to help astronauts take pictures of Earth that will be of the greatest value to scientists and the public, and to make those images freely available on the Internet. Additional images taken by astronauts and cosmonauts can be viewed at the NASA/JSC Gateway to Astronaut Photography of Earth. Caption by Michael Carlowicz.

Astronauts captured this view of smoke plumes blowing out over the Timor Sea from Northern Territory, Australia.