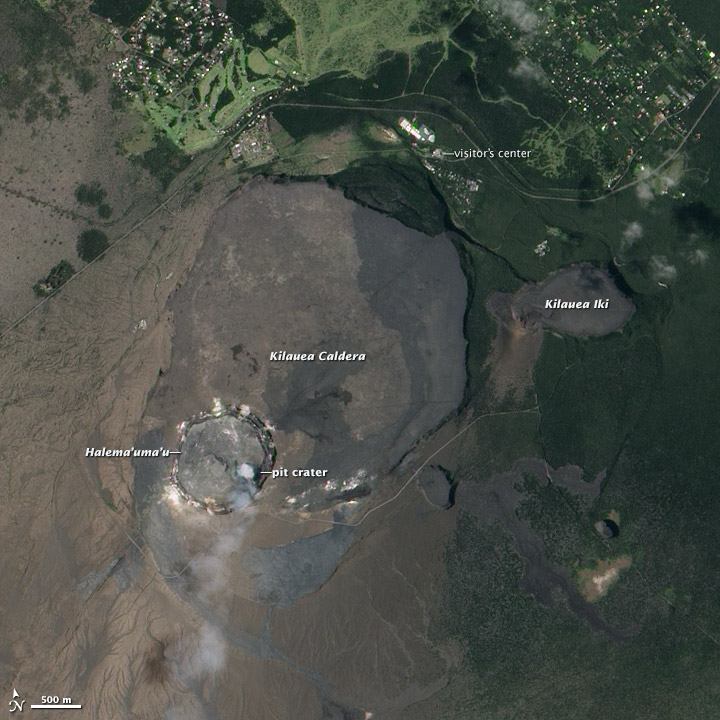 Halema’uma’u Crater is the center of activity at Hawaii’s Kilauea Volcano. From 1820—when visiting scientists began recording their observations—until 1924, Halema’uma’u and much of Kilauea Caldera was usually filled with a lava lake. In 1924, lava drained suddenly, vaporizing groundwater deep beneath the caldera. A series of violent steam explosions followed, sculpting Halema’uma’u into its current shape.

For the rest of the 20th Century, Halema’uma’u occasionally filled with lava, but quickly drained again. Most of the time the crater floor was solid. The pattern ended in March 2008, when a new pit formed along the east (right) edge of Halema’uma’u; deep within the new pit crater was a lava lake. Since the pit crater formed, it has slowly expanded and is now about 160 meters (520 ft) across. The level of the lava fluctuates as magma moves from beneath the summit to the ongoing eruption in Kilauea’s East Rift Zone.

On August 1, 2013, when this natural-color image was acquired by the Advanced Land Imager (ALI) on the Earth Observing-1 (EO-1) satellite, lava was 63 meters (205 ft) below the crater rim. Volcanic gases formed a plume that blew towards the south-southwest.