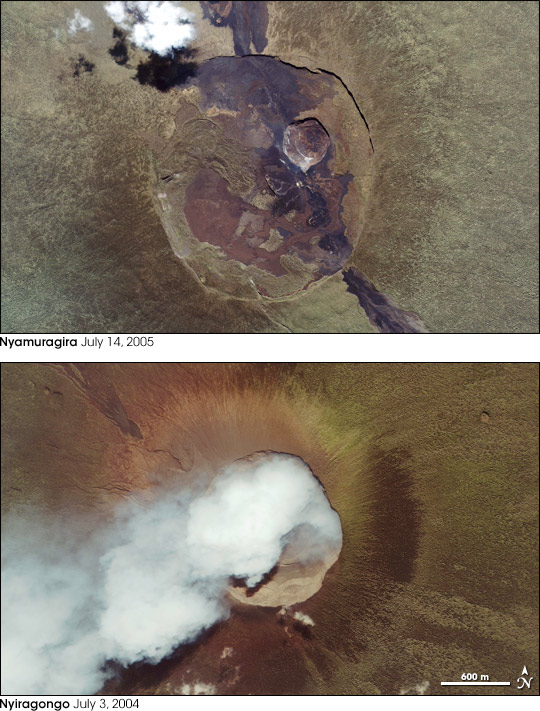 Two East African volcanoes, Nyamuragira and Nyiragongo, account for 40 percent of all recorded eruptions in Africa. The two volcanoes sit along the edge of the Western Rift, part of a giant crack in the Earth’s crust that runs for thousands of miles from the Middle East southward to central Africa. In addition to their shared tendency to produce unusually fast-moving lava flows, the two volcanoes have an even rarer trait in common. The crater of each has periodically contained a lava lake, a huge volume of molten lava pooling in a high-walled summit crater. The lava lakes can drain during eruptions, either spilling over the rim of the crater or bursting from a fissure or vent on the flank.

This pair of high-resolution images from the commercial Ikonos satellite shows the craters of Nyamuragira (top) and Nyiragongo (bottom), both of which are located at the far eastern edge of Democratic Republic of Congo, north of Lake Kivu. Nyamuragira’s larger but shallower caldera is filled with solidified lava flows (purplish gray), some of which spill over the rim and down the flanks to the north and southeast. According to the Smithsonian Global Volcanism Program, the most recent lava lake in the Nyamuragira crater drained during an eruption in 1938; the remnants of that activity are the lighter-purple lavas, mostly in the southwestern part of the crater. Volcanologists from the local, Goma Observatory reported observing a 300-meter-wide lava lake appearing in a pit to the north-northeast of the caldera during a 2004 eruption. More recent eruptions, such as one in late November 2006 that threatened the town of Sake, have occurred from vents on the volcano’s broad, gently sloping flanks.

By contrast, the lava lake in Nyiragongo has drained and refilled several times during eruptions in the past few decades. Evidence of its simmering presence is provided by the plume of smoke and/or steam that billows from crater. In 2002, Nyiragongo’s lava lake drained during a flank eruption on the southern slopes. That lava flow raced into the city of Goma, killing several dozen people.

To read about how NASA scientists are using advanced software and artificial intelligence technology to train satellites to self-direct observations of dangerous volcanoes, please see the Earth Observatory feature story Observing Volcanoes, Satellite Thinks for Itself.

A lava lake persists in the caldera of Nyiragongo Volcano in the Democratic Republic of the Congo.

A lava lake persists in the caldera of Nyiragongo Volcano in the Democratic Republic of the Congo.