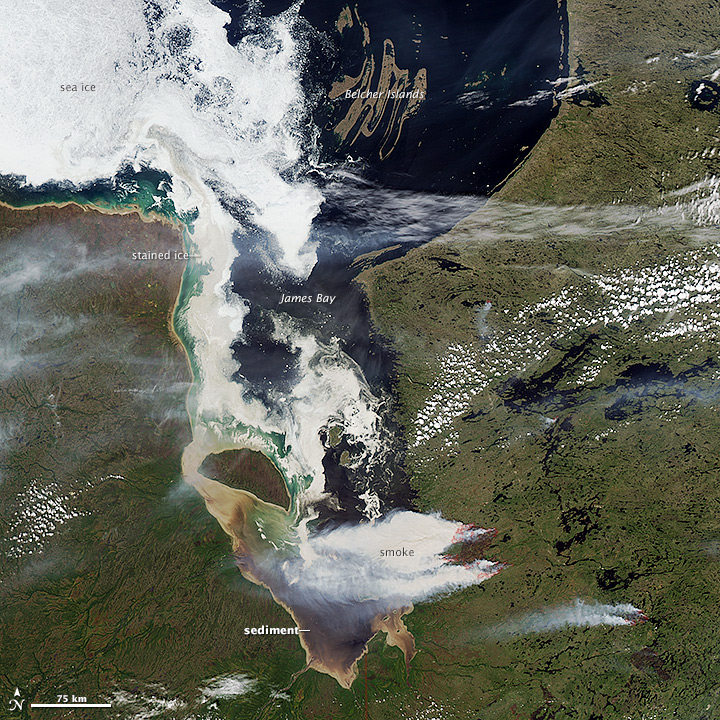 Spring and early summer can be dynamic times in the interior of Canada, with ice retreating, soil thawing, wildfires and agricultural fires sparking, and rivers swelling.

On June 28, 2013, the Moderate Resolution Imaging Spectroradiometer (MODIS) sensor aboard NASA’s Aqua satellite captured just about all of these dynamic processes at work at the same time around James Bay, in western Quebec.

Wildfires raged east of the bay, sending thick plumes of smoke billowing west. Melting sea ice—some of it stained by river sediment and perhaps falling ash—swirled to the north. And sediment and organic matter spilled into James Bay from numerous rivers and colored it dark brown.

The colors of the rivers and southern portion of the bay are related to the bogs—known in Canada as muskeg—that surround James Bay. The bogs contain large amounts of partially decayed sphagnum moss that decomposed into peat over time. Peat releases acidic tannins that stain the water dark brown. Rain and spring snowmelt often cause the bogs to flood, sending large amounts of colored water spilling into the rivers and toward James Bay.

Wildfire and a thawing landscape created a dynamic scene in late June 2013.