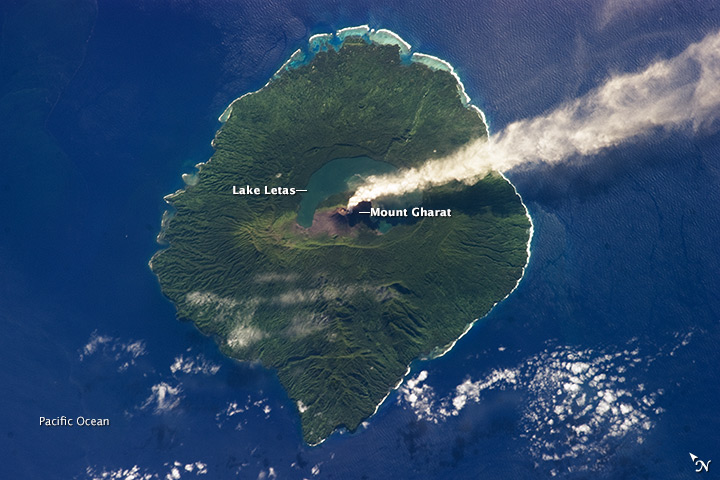 Just 20 kilometers (12 miles) in diameter, Gaua Island is actually the exposed upper cone and summit of a stratovolcano that is 3,000 meters (10,000 feet) high and 40 kilometers (25 miles) in diameter. Most of the volcano is submerged beneath the Pacific Ocean. Also known as Santa Maria Island, Gaua is part of the Vanuatu Archipelago, a group of volcanic islands in the South Pacific Ocean governed by the Republic of Vanuatu.

According to the Smithsonian Institution Global Volcanism Program, the most recent report of eruption activity at Gaua was a steam plume observed on April 29, 2013. This photograph records subsequent steam emissions observed on May 31, 2013, by an astronaut on the International Space Station. The steam plume extends east-southeast from its likely source at Mount Gharat (also spelled Garat or Garet), a historically active cinder cone located along the southwest flank of a 6 by 9 kilometer (4 by 6 mile) collapsed summit caldera. Gaua is one of several volcanoes monitored by the Vanuatu Geohazards Observatory.

The dark blue-green waters of Lake Letas, formed within the caldera, are visible at image center. The majority of Santa Maria Island is covered in green vegetation, with areas directly west and south of Mount Gharat covered with grey ash deposits. Patchy cloud cover is visible to the west and south, but is easily distinguished from the steam plume by its linear nature and brighter tone.

Astronaut photograph ISS036-E-5647 was acquired on May 31, 2013, with a Nikon D3S digital camera using a 400 mm lens, and is provided by the ISS Crew Earth Observations experiment and the Image Science & Analysis Laboratory, Johnson Space Center. The image was taken by the Expedition 36 crew. The image has been cropped and enhanced to improve contrast, and lens artifacts have been removed. The International Space Station Program supports the laboratory as part of the ISS National Lab to help astronauts take pictures of Earth that will be of the greatest value to scientists and the public, and to make those images freely available on the Internet. Additional images taken by astronauts and cosmonauts can be viewed at the NASA/JSC Gateway to Astronaut Photography of Earth. Caption by William L. Stefanov, Jacobs/JETS at NASA-JSC.

Astronauts observed ongoing activity at the volcano in the Vanuatu Archipelago.

Activity at Gaua Volcano, in the South Pacific archipelago of Vanuatu, began in October 2009 and increased in April 2010. Steam and gas emissions continued into 2013. 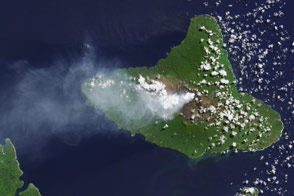 A plume from an active volcano in the Vanuatu archipelago extended over the South Pacific Ocean.