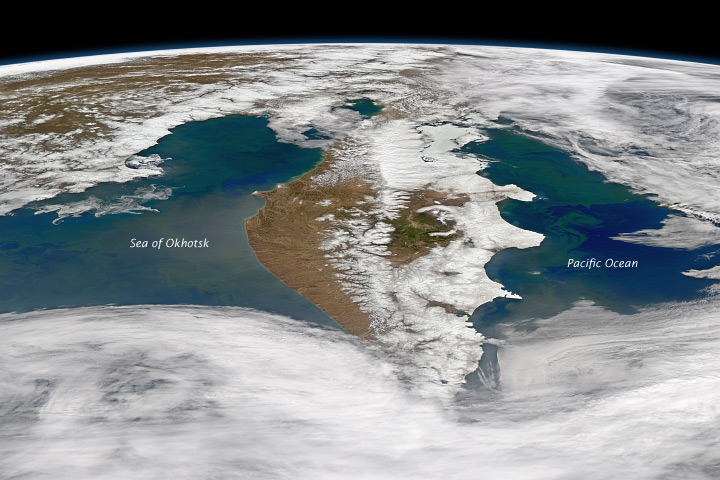 The Kamchatka Peninsula of far eastern Russian was surrounded by life in late May 2013—at least the oceanic sort. Massive blooms of microscopic, plant-like organisms called phytoplankton spread green over the nearby waters. Phytoplankton typically support an abundance of other fish and marine life.

The Moderate Resolution Imaging Spectroradiometer (MODIS) on NASA’s Aqua satellite captured the natural-color imagery to make this composite view on May 23, 2013. Looking toward the North Pole from the southern end of the peninsula, blooms of chlorophyll-rich cells appear off both the west coast—in the Sea of Okhotsk—and to the east in the North Pacific Ocean.

Stretching nearly 1,250-kilometers (780 mile) from north to south, the peninsula is dotted with volcanoes, some of which are faintly visible in the image above. (Click on the large version for a better view.) Kamchatka lies along the Pacific “Ring of Fire,” an area of extremely active volcanism and plate tectonic earthquakes.

That volcanism probably played some part in these blooms. Several volcanoes—including Kizimen, Shiveluch, and Bezymianny—have been spewing iron-rich ash and lava, both of which fall in the ocean. Iron also runs off the land in rivers and gets churned up from the ocean floor by currents and storms. Iron is a key nutrient for phytoplankton growth, as it helps them process nitrate. The east side of the Peninsula is also bathed in the cool, nutrient-rich Oyashio Current, which originates in Arctic waters and flows south along the coast of Siberia and Kamchatka toward Japan.

Iron-rich waters around the Peninsula were teeming with phytoplankton in May 2013.