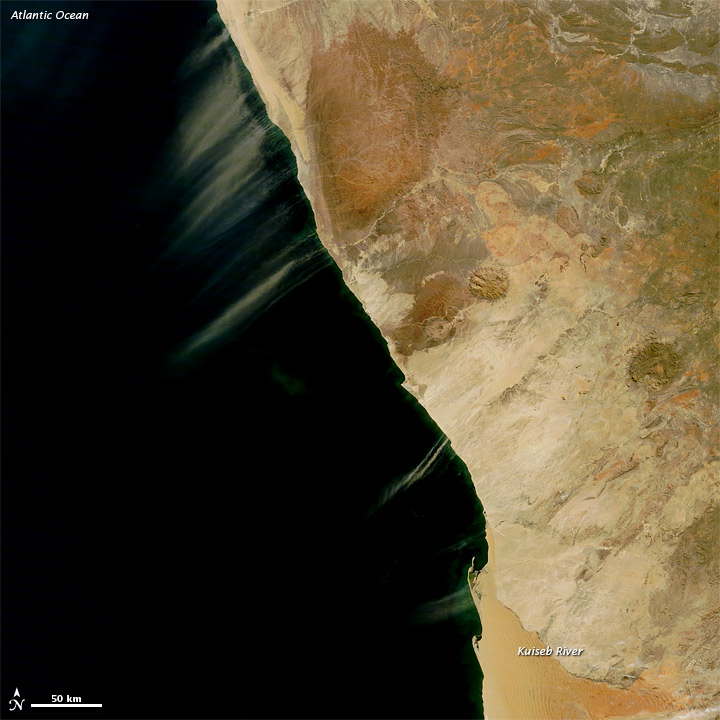 Dust plumes blew off the coast of Namibia in early May 2013. The Moderate Resolution Imaging Spectroradiometer (MODIS) on NASA’s Terra satellite captured this natural-color image on May 5, 2013. Parallel plumes blew toward the southwest, many of them coalescing into larger plumes over the Atlantic Ocean.

The Namib Desert stretches hundreds of kilometers along the Namibian coast. The Kuiseb River marks a significant change in land cover. South of the river, giant sand dunes march northward, driven by relentless winds, but the vegetation along the Kuiseb River provides a barrier to both the wind and the dunes’ continued movement. North of the river, the land surface consists largely of gravel plains and rocky hills.

Even though the southern part of the desert is richer in sand, the northern part of the Namib Desert can also give rise to dust storms, thanks to sandy terrain hugging the coast. Nearly all the dust plumes visible in this image have arisen north of the Kuiseb River.