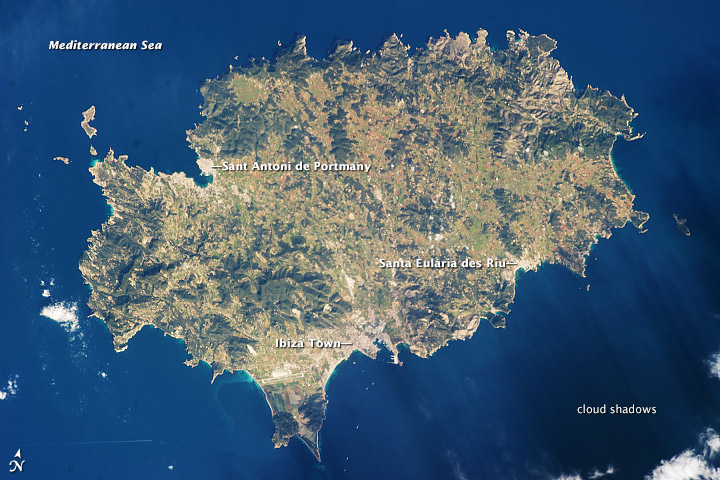 The island of Ibiza—Eivissa in the native Catalan language—is located off of the southeastern coast of Spain and is part of the Balearic archipelago. Together with the neighboring island of Formentera (not shown), it comprises the Pine Islands of the western archipelago.

The largest cities on the island—Ibiza Town, Sant Antoni de Portmany, and Santa EulÃ ria des Riu—appear as white to pink regions near coastal bays in this photograph from the International Space Station. Like many of the Balearic Islands, the major industry of Ibiza is tourism, and Ibiza Town and Sant Antoni de Portmany are particularly well known for their nightlife.

Much of the lowland interior is covered with green to light brown agricultural fields; some of them are in active production of wheat, olives, and grapes, but others are inactive and undergoing a re-growth of native trees such as pine (Pinus halpensis) and savine (Juniperus phoenicea). The northern and southwestern coastlines are hilly (grey-brown regions), with the highest peak (Sa Talaia; 475 meters above sea level) located in the southwestern region.

Parts of the island and near-shore waters are designated as UNESCO World Heritage sites and provide opportunities for rock climbing and ecotourism. The island hosts a large variety of birds and lizards, though no large land fauna are present. Parts of Ibiza and Formentera wetlands have been identified as habitat for nesting and migratory waterbirds by the Ramsar Convention of Wetlands of International Importance.

Ships and their wakes are visible near Ibiza Town, and an airplane contrail appears off the southwestern coastline (lower left). The Mediterranean Sea to the southeast appears dark due to shadowing by clouds, just visible in the lower right corner.

Astronaut photograph ISS035-E-7431 was acquired on March 22, 2013, with a Nikon D3S digital camera using a 400 millimeter lens, and is provided by the ISS Crew Earth Observations experiment and Image Science & Analysis Laboratory, Johnson Space Center. The image was taken by the Expedition 35 crew. It has been cropped and enhanced to improve contrast, and lens artifacts have been removed. The International Space Station Program supports the laboratory as part of the ISS National Lab to help astronauts take pictures of Earth that will be of the greatest value to scientists and the public, and to make those images freely available on the Internet. Additional images taken by astronauts and cosmonauts can be viewed at the NASA/JSC Gateway to Astronaut Photography of Earth. Caption by William L. Stefanov, Jacobs/ESCG at NASA-JSC. 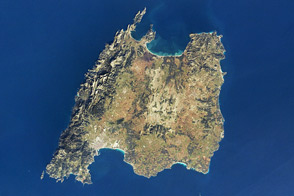 With mountains and coastline in close proximity, the island is a popular holiday destination for Europeans.