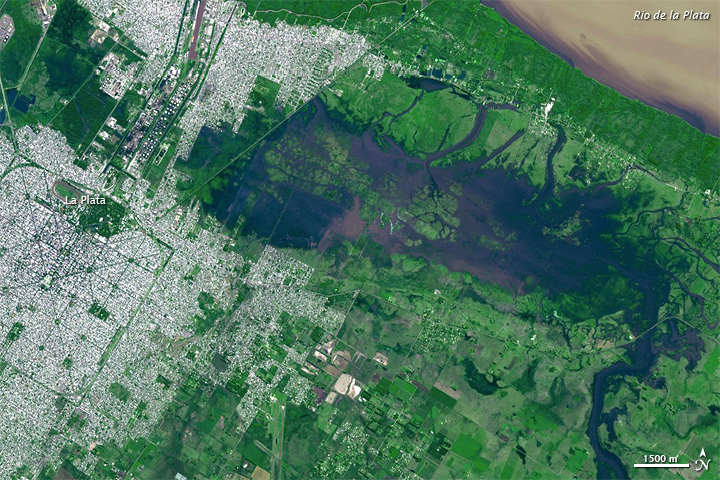 In early April 2013, severe flooding claimed more than 50 lives, and forced thousands from their homes in the Buenos Aires region, news sources said. Many of the casualties occurred in La Plata, situated about 60 kilometers (40 miles) southeast of Buenos Aires. Roughly 40 centimeters (16 inches) of rain fell on La Plata in a two-hour period April 2–3, Agence France-Presse reported.

Flood water lingered when the Advanced Spaceborne Thermal Emission and Reflection Radiometer (ASTER) on NASA’s Terra satellite captured this image on April 4, 2013. ASTER combines infrared, red, and green wavelengths of light to make false-color images that help to distinguish between water and land. Much of the water in this scene appears bright blue, including the broad expanse of flood water east and southeast of the city. In Rio de la Plata (upper right), water is clogged with sediment and appears beige. Vegetation is bright green and urban areas are pale blue-gray.

The braided streams of the Betsiboka Estuary have largely returned to their normal size, leaving puddles of blue and green water to show the extent of earlier flooding. Tropical Cyclone Gafilo moved across Madagascar on March 7 and 8, dumping heavy rain in its path. As time passed, the waters eventually flowed down the rivers to the coast, flooding the low-lying land in the west. The Advanced Spaceborne Thermal Emission and Reflection Radiometer (ASTER) on the Terra satellite captured this image of the estuary on March 20, 2004. The false-color image uses green, red, and near-infrared light (ASTER bands 3, 2, 1) so that the main river is green, other water is blue, and vegetation is red.

Flooding along the Betsiboka River & Estuary