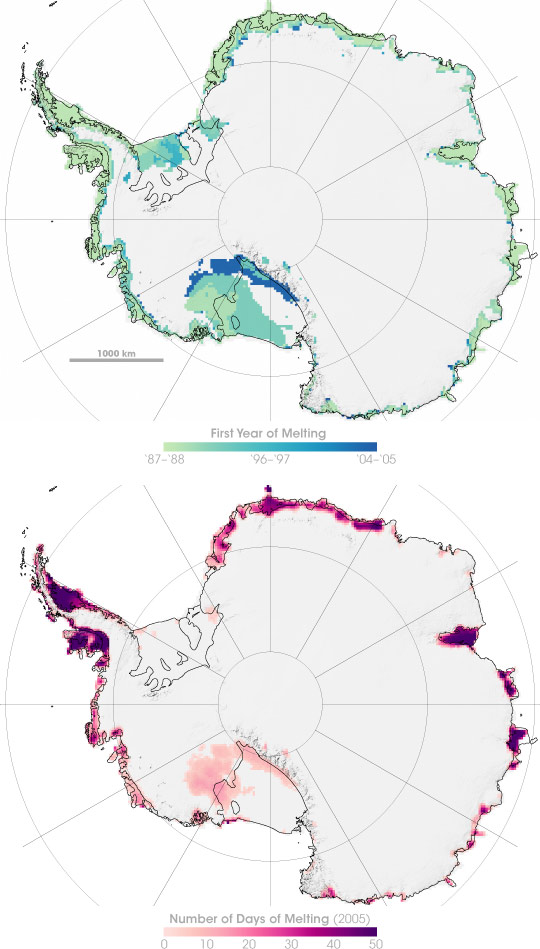 In places, Antarctica’s rugged, coastal mountain ranges just barely break the surface of a sea of snow and ice thousands of feet thick. On its high, inland plateau sits a sheet of ice more than a mile thick. Massive ice shelves hang off the continent’s into the freezing sea. Even in the summer, most of the continent stays below zero. But even the coldest continent on Earth is melting, say NASA scientists. These maps illustrate different aspects of seasonal melting on the continent.

After analyzing 20 years of satellite data, scientists have concluded that persistent melting—melting that lasts for at least three daytime periods or one consecutive day and night—has been occurring increasingly farther inland and at higher altitudes over the past two decades. The top map shows how the area affected by persistent melting has expanded since 1987. The colors represent the first year in which satellites observed persistent melting. Light green shows areas where melting was observed from the beginning, while blue shows areas where melting occurred for the first time more recently.

The bottom map shows the number of days on which melting occurred in 2005, a year of particularly dramatic melting. Snow melted as far inland as 500 miles and at altitudes of 1.2 miles above sea level. Not surprisingly, melting lasted longest (dark purple) on the Antarctic Peninsula, which stretches northward away from the continent. The Ross Ice Sheet and the land to its interior also experienced between 10-20 melting days in 2005.

Although Antarctica is often shrouded in clouds and experiences months of complete darkness each year, satellites have been able to observe melting on the surface routinely using microwave-frequency observations. Photo-like images of the surface can only be captured in daylight and on clear days, but snow and ice emit microwave frequency energy that passes right through clouds, day and night. Even the smallest amount of liquid water in the snow changes the unique microwave signal given off by the snow, allowing scientists to map areas where the surface has melted.

NASA images by Robert Simmon, based on data from Marco Tedesco.