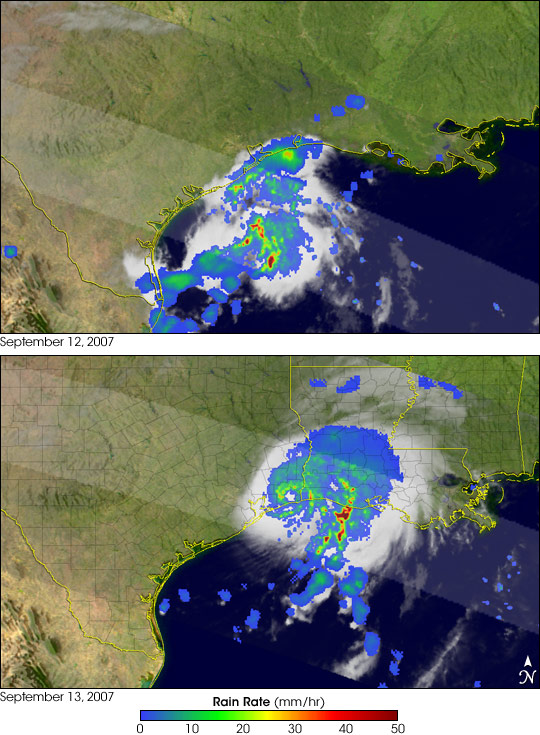 Though it was not a powerful storm, Hurricane Humberto did set a record when it formed in the Gulf of Mexico and came ashore at the Texas–Louisiana state line in mid-September 2007. According to National Hurricane Center records, no storm has ever developed to hurricane strength so rapidly so close to landfall; forecast discussions reported that the storm went from a tropical depression with wind speeds of 30 knots (about 55 kilometers/hour, or 35 miles/hour) at 10:00 a.m. U.S Central Daylight Time on September 12 to a 75-knot hurricane (139 km/h, 86 mph) at 4:00 a.m. on September 13.

This pair of images shows rainfall rates and clouds in Hurricane Humberto at two stages of its development. Lowest rain rates are blue; highest rain rates are red. On September 12 (top), the storm was not well organized. The bands of heaviest rain were beginning to curve a bit, which is a sign that a circulation was developing. By September 13, however, the storm looked much more like a hurricane, despite the fact that its eye was already over land (which weakens storms). The ring of moderately intense rainfall around the eye (green and yellow) is just west of the Texas–Louisiana state line. The heaviest rain falls in a vertical stripe that stretches from the Gulf of Mexico onshore over Louisiana.

The observations in the center (brighter) swath were made by the Precipitation Radar on the Tropical Rainfall Measuring Mission (TRMM) satellite, while those in the outer swaths were collected by the satellite’s Microwave Imager. The rainfall estimates are overlaid on an infrared image of the storm’s clouds collected by the TRMM’s Visible and Infrared Scanner. Additional images and animations of rainfall associated with Humberto are available on the TRMM Website. TRMM is a joint mission between NASA and the Japanese space agency, JAXA.