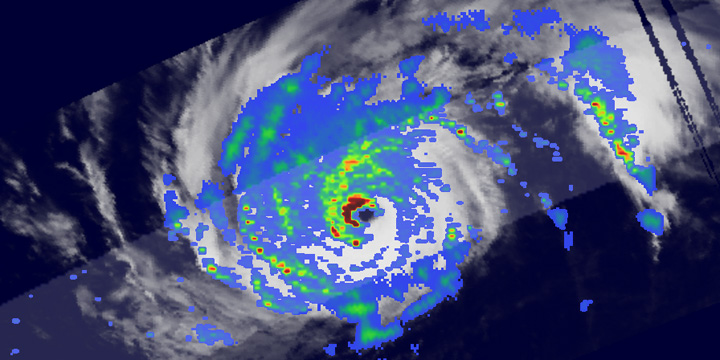 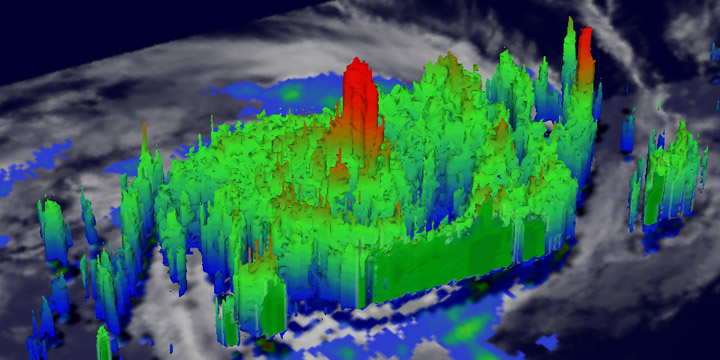 Hurricane Danielle became the first major hurricane of the 2010 Atlantic hurricane season on July 27, 2010. Danielle, which had been a Category 2 storm the day before, quickly intensified overnight. By 5:00 a.m. Atlantic Standard Time, the storm was a power Category 4 hurricane on the Saffir-Simpson scale with sustained winds of 215 kilometers per hour (135 miles per hour), according to the National Hurricane Center. The Tropical Rainfall Measuring Mission (TRMM) satellite passed directly over Danielle during the night and captured these remarkable images as the storm was in the process of intensifying.

The images were taken at 2:46 a.m. Eastern Daylight Time (06:46 UTC) on August 27, 2010, while Danielle was intensifying. The top image shows a top-down view of rain intensity within the storm, while the lower image provides a three-dimensional view of the storm. The rain rates in the top image show the structure of the storm. Danielle had a well-formed eye surrounded by sharply curved rainbands—all signs of mature storm with an intense circulation. TRMM also reveals that there were very powerful thunderstorms in Danielle’s eye wall dropping extreme amounts of rain, shown in dark red, especially in the northwest quadrant.

In the towering clouds, air is rising rapidly. As the air reaches cooler temperatures, water vapor condenses into cloud droplets and releases energy in the form of heat. Known as latent heating, this heat makes the air even more buoyant, causing it to rise yet more. Because air is rising quickly, the air pressure in the center of the storm drops. Air from the outer edges of the storm rushes in to replace the rising air, driving the storm’s circulation. By causing the storm’s central pressure to drop, latent heating in tall towers intensifies a storm.

The tower of clouds at Danielle’s center reached more than 15 kilometers (9 miles) into the atmosphere. These storms within a storm were releasing vast amounts of heat into Danielle’s core, allowing the storm to become a major hurricane overnight. As of August 27, Danielle was expected to remain a major hurricane until August 28 or 29, when the National Hurricane Center predicted it would curve northeast over cooler waters in the central Atlantic. Danielle was not expected to threaten land.

Danielle formed as a tropical depression over the Atlantic Ocean on August 22, 2010, and strengthened to a tropical storm the next day. On August 27, Danielle strengthened into a major hurricane. By August 29, the hurricane was back to category one and losing energy in the North Atlantic.