Urbanization Between Washington, D.C. and Baltimore 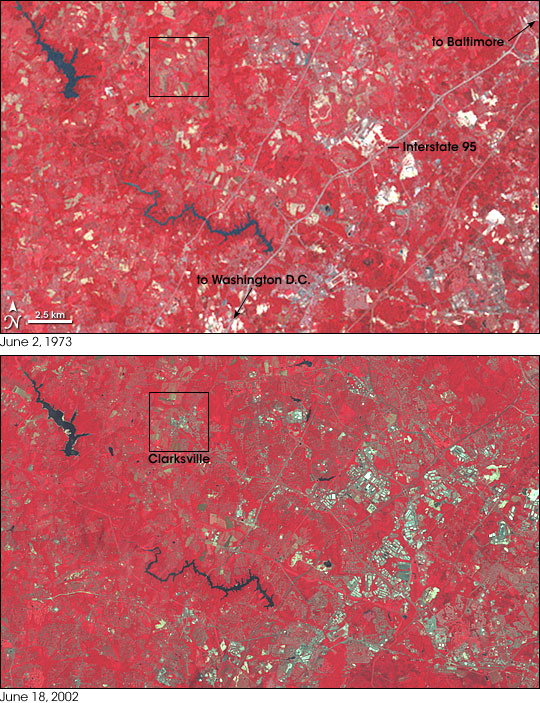 Between Washington, D.C., and Baltimore, Maryland, landscapes that were largely rural and agricultural 30 years ago are filling with residential and commercial development. Captured 29 years apart by two NASA Landsat satellite missions, this pair of images uses false-color to emphasize the contrast between vegetation (red) and other land surfaces. Roads and other paved surfaces appear gray, bare ground (often fallow fields) appears light tan or nearly white, and water is blue.

In this pair of images from 1973 (top) and 2002 (bottom), the most dramatic changes are visible in the right-hand part of the scene, along the Interstate 95 corridor. Obviously developed areas, where buildings and roads are arranged in distinct, geometric, gray grids, are mixed with a subtler type of change: a faint grayish cast that appears virtually everywhere in the more recent image. These not-quite-urban areas are suburbs and housing sub-divisions. The city of Clarksville, Maryland, is outlined in a black box to call attention to the seemingly subtle change between the two time periods.

When urban and suburban areas grow, some of the impacts on surrounding natural and agricultural ecosystems are obvious: “green space” simply disappears, along with the wildlife that lived there. The vegetation that remains—in parks, along roads, or at the fringes of cities and town—is changed by the development as well. Spring comes sooner because urbanized areas are often warmer than the surrounding landscape; pavement, vehicles, and heat created by energy use can raise the temperature up to 10 degrees Fahrenheit compared surrounding rural areas.

NASA scientist and Maryland resident Wayne Esaias believes that urbanization is behind a dramatic change in the timing of honey production by his backyard bees. Since 1992, the bees he keeps at his house in central Maryland have been producing honey earlier and earlier in the year. Since the bees are largely dependent on flowering trees for nectar, the advance in honey production means that trees nearby must be flowering earlier, too. Esaias thinks that if he can establish a network of beekeepers to collect data on the timing of honey production in many areas, it will help ecologists better predict how the species in an ecosystem will—or won't—adapt to global warming. To read more about how honeybees may be indicators of climate change, please read the Earth Observatory feature Buzzing About Climate Change.

You can download a high resolution KMZ file of the urbanization changes near Washington D.C. and Baltimore suitable for use with Google Earth.

Since 1984, the Capital Beltway has gotten wider and much busier as suburbs have sprung up along it.