Fires and Smoke Across South America 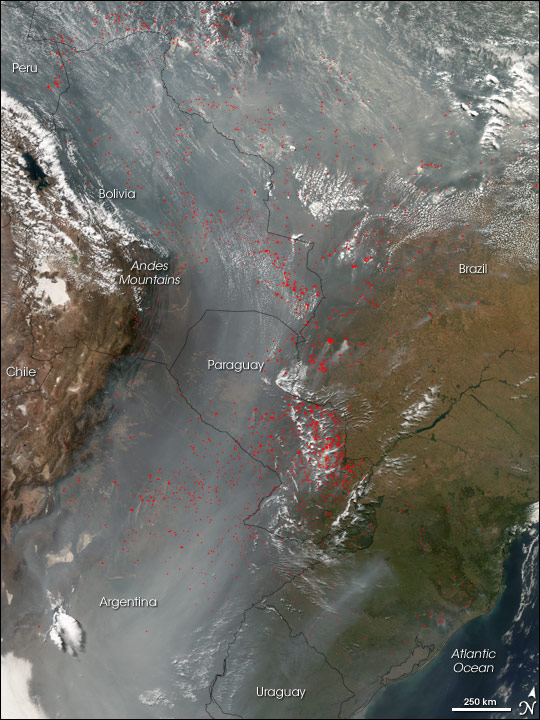 The skies over the heart of South America were thick with the smoke from thousands of fires on September 9, 2007. In this image from the Moderate Resolution Imaging Spectroradiometer (MODIS) on NASA’s Aqua satellite, locations where the sensor detected actively burning fires are marked with red dots. The skies are flooded with smoke, which pools along the eastern foothills of the Andes Mountains for thousands of kilometers. (North-to-south this image covers 3,050 kilometers; if we laid it over a map of the central United States, it would spill over the borders into both Canada and the Gulf of Mexico for at least a hundred kilometers in both directions.)

Although naturally occurring fires are not uncommon in the drier forests and grasslands of South America, this type of intense, continent-spanning fire activity is almost certainly a product of human activities. Some fires are intentional, set by people to clear forest, savannas, and grasslands for ranching or farming. Other fires occur accidentally from human activities. Landscapes that have been disturbed by logging, fragmentation, or previous accidental fire are more prone to catch fire accidentally. In these situations, planned fires (such as brush clearing fires on already cleared land) can easily get out of control and invade other areas, especially during drought years.

The image spans a variety of ecological regions. The top of the scene, including Peru, northern Bolivia, and western Brazil is home to the southernmost portions of the Amazon Rainforest. These wetter forests give way to the south to drier forests and more open woodlands in southern Bolivia, northwestern Paraguay and northern Argentina east of the Andes; this area is called the Chaco. In Uruguay and southern Brazil, the natural vegetation is savannas and grasslands. Even in ecosystems where fires occur naturally (the Chaco, savannas, and grasslands), human activities may change the frequency and intensity of fires. The number and different kinds of plants and animals may change as a result. And in the Amazon, naturally occurring fire was historically very rare, and trees and other plants have no real adaptations to fire. Fires in the rainforest have the potential to completely transform the Southern Amazon forests into a savanna.

Fires influence not only the land surface, but the atmosphere as well. Research suggests that the impacts of smoke on the tropical atmosphere vary from place to place, season to season, and year to year. Studies have shown smoke reducing cloudiness over the Amazon itself, but not over the nearby ocean and not every year. The net impact on rainfall is also uncertain. Smoke particles suppress cloud formation by providing an over-abundance of condensation sites for water vapor. The water vapor spreads out over these particles, and it takes the cloud droplets longer to get big enough to fall as rain. The flip side, however, is that the smaller, lighter cloud droplets can rise much higher into the atmosphere, which ultimately invigorates updrafts, intensifies thunderstorms, and produces large hail and heavy rain. The competing effects in different areas and weather conditions make it extremely challenging for scientists to say what the overall effect of smoke on clouds and rainfall is.

NASA’s Terra and Aqua satellites each have a MODIS sensor capable of detecting fires and mapping the extent of smoke aerosols on a daily basis. Scientists from around the world are using these data to advance our understanding of how natural and human-caused fires are changing our planet.

Scores of fires filled the South American skies with smoke in September 2007.