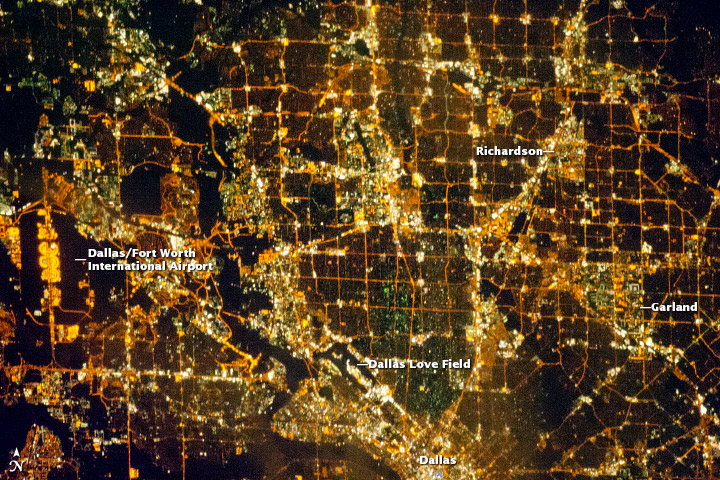 Most metropolitan areas of the western United States are spread over large areas with regular street grid patterns that are highly recognizable from space (particularly at night). The northern Dallas metro area in Texas exhibits this pattern in this astronaut photograph from the International Space Station.

The north-south and east-west grid of major streets is highlighted by orange lighting, which lends a fishnet-like appearance to the urban area. Smaller residential and commercial buildings give green-gray stipple patterns to some blocks. The airplane terminals of Dallas-Fort Worth International Airport are lit with golden-yellow lights and surrounded by relatively dark runways and fields. Likewise, the runways of Dallas Love Field are recognizable by their darkness.

Other dark areas within the metro region are open space, parks, and water bodies. Larger commercial areas, as well as public and industrial facilities, appear as brilliantly lit regions and points. For comparison, a day-time view of Dallas is available here.

Dallas is part of the larger Dallas-Fort Worth-Arlington Metropolitan Statistical Area (population 6,526,548 in 2011), as recognized by the U.S. Census Bureau. To most Texans, it is simply “DFW” or “the Metroplex.” Several of the larger urban areas within DFW are visible in this image; Dallas, Garland, and Richardson all have populations above 100,000 according to the North Central Texas Council of Governments. While the economy of Dallas was historically based in the oil and cotton industries, today commerce, technology, healthcare, and transportation are the major economic drivers.

Astronaut photograph ISS033-E-21663 was acquired on November 15, 2012, with a Nikon D3S digital camera using a 400 millimeter lens, and is provided by the ISS Crew Earth Observations experiment and Image Science & Analysis Laboratory, Johnson Space Center. The image was taken by the Expedition 33 crew. It has been cropped and enhanced to improve contrast, and lens artifacts have been removed. The International Space Station Program supports the laboratory as part of the ISS National Lab to help astronauts take pictures of Earth that will be of the greatest value to scientists and the public, and to make those images freely available on the Internet. Additional images taken by astronauts and cosmonauts can be viewed at the NASA/JSC Gateway to Astronaut Photography of Earth. Caption by William L. Stefanov, Jacobs/ESCG at NASA-JSC.