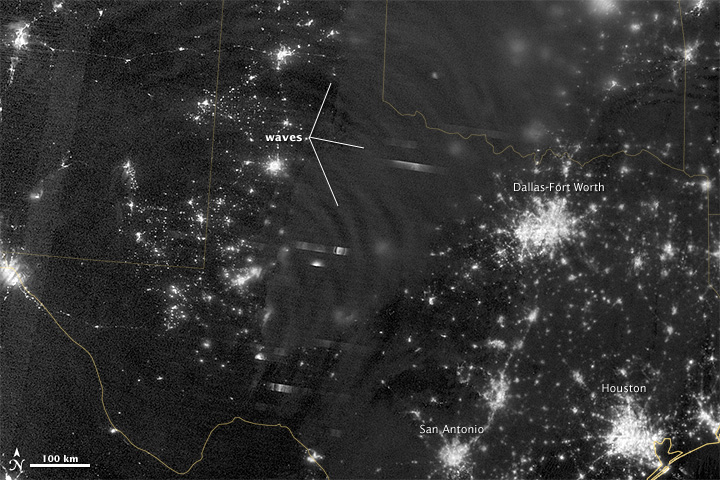 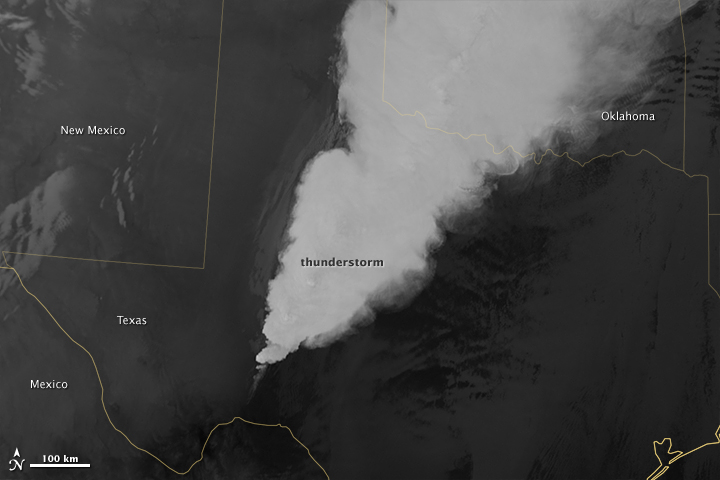 In April 2012, waves in Earth’s “airglow” spread across the nighttime skies of Texas like ripples in a pond. In this case, the waves were provoked by a massive thunderstorm.

Airglow is a layer of nighttime light emissions caused by chemical reactions high in Earth’s atmosphere. A variety of reactions involving oxygen, sodium, ozone, and nitrogen result in the production of a very faint amount of light. In fact, it’s approximately one billion times fainter than sunlight. This chemiluminescence is similar to the chemical reactions that light up a glow stick or glow-in-the-dark silly putty.

The “day-night band,” of the Visible Infrared Imaging Radiometer Suite (VIIRS) on the Suomi NPP satellite captured these glowing ripples in the night sky on April 15, 2012 (top image). The day-night band detects lights over a range of wavelengths from green to near-infrared and uses highly sensitive electronics to observe low light signals. (The absolute minimum signals detectable are at the levels of nightglow emission.) The lower image shows the thunderstorm as observed by a thermal infrared band on VIIRS. This thermal band, which is sensitive only to heat emissions (cold clouds appear white), is not sensitive to the subtle visible-light wave structures seen by the day-night band.

Technically speaking, airglow occurs at all times. During the day it is called “dayglow,” at twilight “twilightglow,” and at night “nightglow.” There are slightly different processes taking place in each case, but in the image above the source of light is nightglow.

The strongest nightglow emissions occur mostly in a relatively thin layer of atmosphere between 85 and 95 kilometers (53 and 60 miles) above the Earth’s surface. Little emission occurs below this layer since there’s a higher concentration of molecules, allowing for dissipation of chemical energy (via collisions rather than light production). Likewise, little emission occurs above that layer because the atmospheric density is so low that there are too few light-emitting reactions to yield an appreciable amount of light.

While nightglow is a well-known phenomenon, it is not typically considered by meteorological sensors. In fact, scientists were surprised at Suomi NPP’s ability to detect it. During the satellite’s check-out procedures, scientists thought this light source was a problem with the sensor until they realized that they were seeing the faintest light in the darkness of night.

NASA Earth Observatory image by Jesse Allen and Robert Simmon, using VIIRS Day-Night Band data from the Suomi National Polar-orbiting Partnership. Suomi NPP is the result of a partnership between NASA, the National Oceanic and Atmospheric Administration, and the Department of Defense. Caption by Aries Keck and Steve Miller. 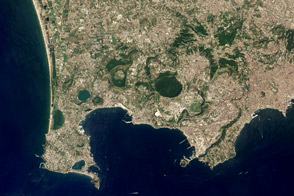