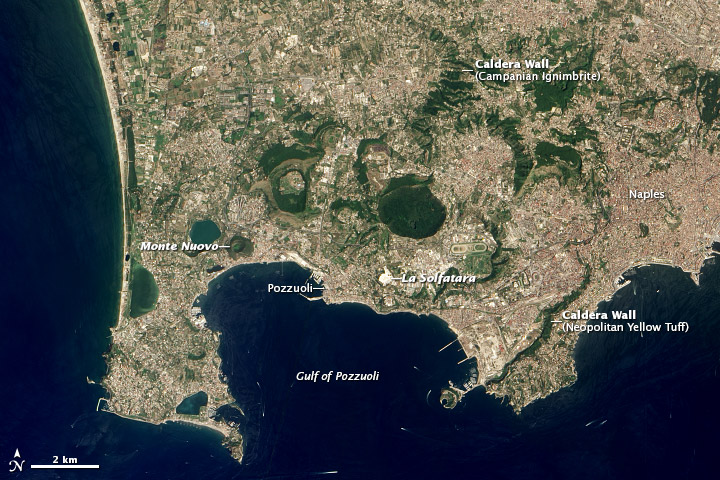 Since the Neopolitan Yellow Tuff was formed, numerous small eruptions have occurred in the caldera complex, mostly less than half a cubic kilometer (0.1 cubic miles) in size. The most recent eruption occurred in 1538 at Monte Nuovo, a small cinder cone; that strombolian activity killed at least 32 people.

The most obvious manifestation of the magma under the surface at the Campi Flegrei is the La Solfatara, a region of intense hydrothermal activity. There has also been repeated cycles of uplift and subsidence near the city of Pozzouli, sometimes on the order of meters per decade, along with degassing within the Gulf of Pozzouli.

This natural-color image was acquired by the Advanced Land Imager (ALI) aboard the Earth Observing-1 (EO-1) satellite on July 9, 2012.

The Campi Flegrei calderas, adjacent to Naples, Italy, have produced two of the largest eruptions in Europe in the last 40,000 years.