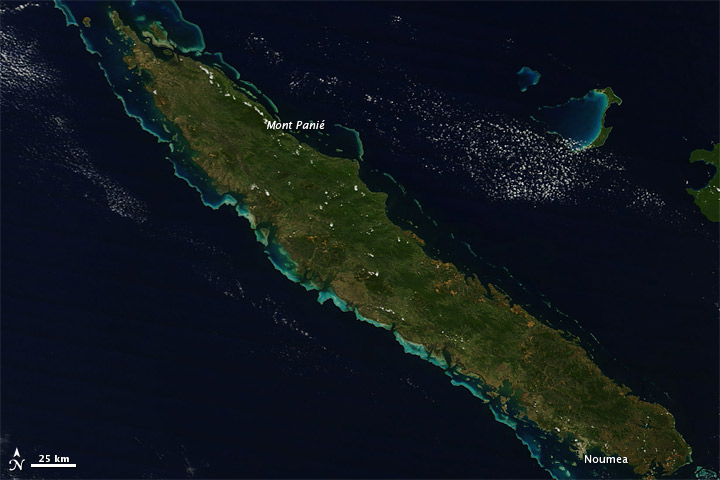 New Caledonia has a hot and humid climate, but conditions vary between the coasts of Grande Terre. Trade winds from the southeast bring relatively cool, moist air to the eastern part of the island, where rich forests fill the coastal strip east of the mountains. In the west lie open, arid plains. Between the east and west coasts, a mountain range forms the island’s spine. The tallest point is Mont Panié with an elevation of 1,628 meters (5,341 feet) above sea level.

The British explorer James Cook gave New Caledonia its name because its mountains reminded him of Scotland (once named Caledonia). In the years since his expedition, geologists have teased New Caledonia’s history from clues in the rock record. New Caledonia was once a part of Gondwana, an ancient supercontinent that broke apart tens of millions of years ago. New Caledonia drifted northeastward and finally settled in its current position about 50 million years ago. Between 45 and 33 million years ago, tectonic plates colliding with each other uplifted the region, including part of the sea floor. Once elevated, New Caledonia began to erode, thanks to the action of wind and water.

New Caledonia’s rocks are unusually rich in iron, magnesium, and nickel; in fact, the island is home to about a quarter of the world’s known nickel resources. Meanwhile the soils are poor in nitrogen, calcium, phosphorus, and potassium, and plant life has had to adapt. About 75 percent of New Caledonia’s plant species are found only the island, placing New Caledonia third, after Hawaii and New Zealand, for endemic plant species.

Marine life around New Caledonia rivals the unique plant life. The United Nations Educational, Scientific and Cultural Organization (UNESCO) characterizes the reef system as “the world’s most diverse concentration of reef structures.” The reef, mangrove, and seagrass habitats provide homes to fish, marine invertebrates, marine mammals (such as whales and dugongs), and turtles. 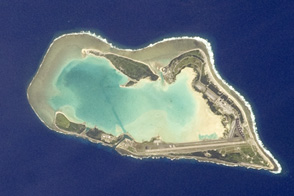 Howland Island is a United States possession located in the north Pacific between Australia and the Hawaiian Islands. Prior to 1890, organic nitrate (guano) was mined from the island by both the United States and the British. This tiny island (1.6 km²) is currently part of the U.S. National Wildlife Refuge system, and provides nesting areas and forage for a variety of birds and marine wildlife. The island is composed of coral fragments and is surrounded by an active fringing reef. White breakers encircling the island indicate the position of the reef. Astronauts aboard the International Space Station photograph numerous reefs around the world as part of a global mapping and monitoring program.