Clouds, Fire, and Ice in the Cascades 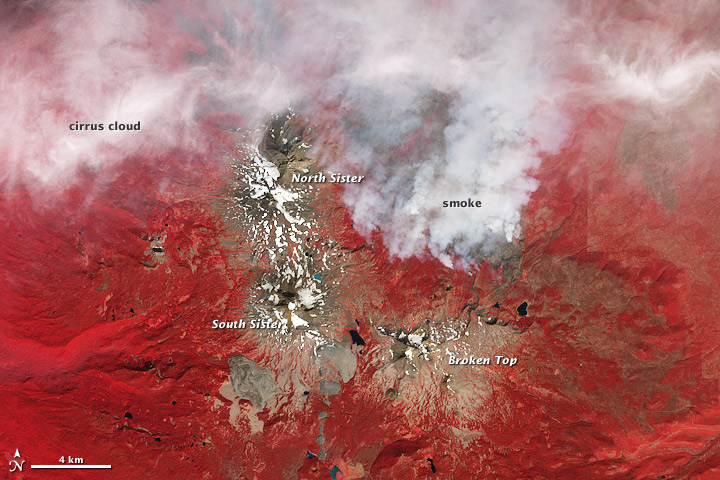 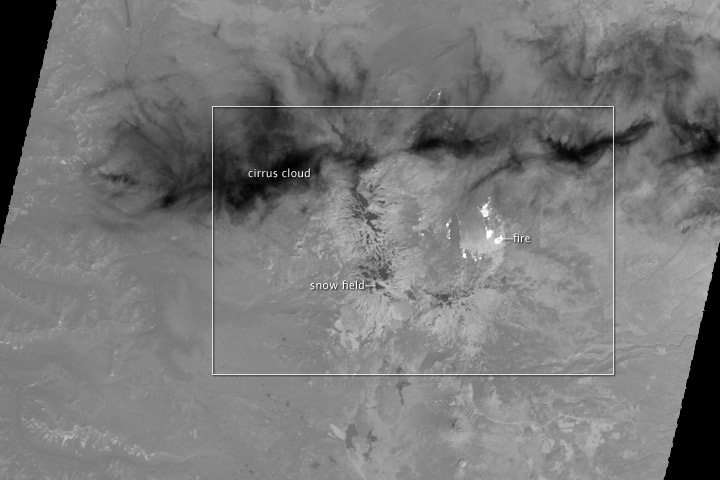 On September 19, 2012, the Advanced Spaceborne Thermal Reflection and Emission Radiometer (ASTER) on NASA’s Terra satellite collected these unique views of the Three Sisters and Broken Top volcanoes near Bend, Oregon. At the time, the Pole Creek fire blazed nearby in Deschutes National Forest.

ASTER combines 14 spectral bands in infrared, red, and green wavelengths of light to make false-color images. In the top image, vegetated areas appear bright red; snow and ice looks white; and clouds are a wispy off-white. Exposed rock and barren land near the summits of the mountains are shades of brown. Smoke billowing from the fire appears gray.

A view of the same area created from ASTER’s thermal band (bottom) shows how temperature varies across the scene. Warmer temperatures are shown with brighter colors, and cooler temperatures are darker. Actively-burning hot spots from the Pole Creek fire are the hottest features in the image, while high-floating cirrus clouds near North Sister are the coldest.

The smoke is transparent to ASTER’s thermal band because smoke plumes consist of ash particles and other combustion products so fine that they are easily penetrated by the relatively long wavelengths of thermal infrared radiation. By contrast, ASTER cannot see through clouds because they tend to have larger particles that thermal infrared cannot easily pass through.

About 20,000 years ago, ice likely blanketed the mountains that make up the Oregon Cascades, forming a small ice cap. Most of that ice retreated long ago, but scattered glaciers still dot the upper reaches of Oregon’s tallest peaks.

Today there are more than 450 perennial snow and ice features in Oregon. About 60 of these are larger than a square kilometer, and 35 are named glaciers. About half of the named glaciers are situated near the Three Sisters and Broken Top volcanoes. All of the peaks top 9,100 feet (2,700 meters). South Sister, at 10,358 feet (3,157 meters), is the third tallest mountain in the state; North Sister, at 10,085 feet (3,074 meters), is the fourth tallest.

On September 19, 2012, smoke from the Pole Creek fire, along with clouds and ice, combined to create this unique view of the Three Sisters and Broken Top in Oregon.