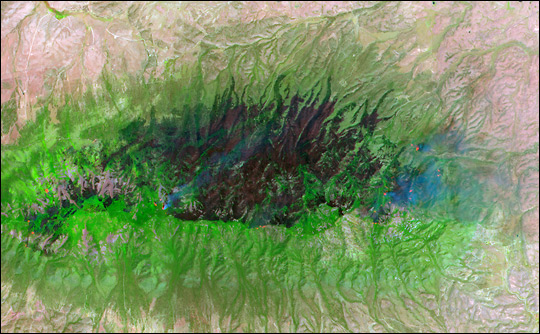 A huge swath of forest in the El Capitan Mountains in New Mexico has been scorched by the lightning-caused Peppin Fire since it began on May 15, 2004. As of June 4, 2004, the National Incident Coordination Center estimated that the blaze burned roughly 44,500 acres, and was about 45 percent contained. This image from the Advanced Spaceborne Thermal Emission and Reflection Radiometer (ASTER) shows the fire on May 29, during a relative lull in activity brought by more moderate weather conditions in preceding days—lighter winds, higher humidity, and cloudiness.

This false-color composite was created by combining shortwave infrared, infrared, and near-infrared wavelengths (ASTER bands 4, 3, and 2). In this treatment, healthy vegetation appears green, barren land with little vegetation is pale pink, while the fire scar has a deep magenta/brown tone. Small regions that are still burning show up bright red due to the hot thermal emission from the flames. Smoke around the perimeter of the fire, especially in the east, appears light blue.

The pattern of burning appears different on the northern versus the southern perimeter of the fire. In the north, the inky burn scars spread down the flanks of the mountains toward the plain below in filaments. To the south a more continuous line encircles the burned area. In the large image, you can see several patches of unburned vegetation scattered throughout the charred areas.